It's the final day of DCUC 2011 month here, and I'm closing it out with a DCUC vs MotUC two-pack.  Aquaman!  Merman!  How epic is that? 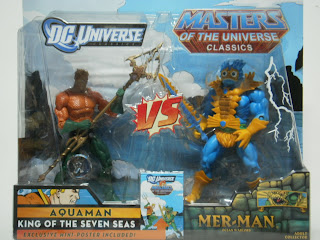 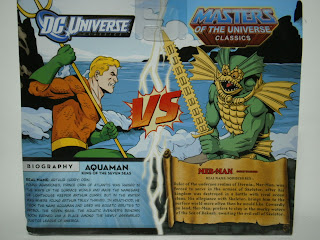 The packaging has the usual mash-up of both the DCUC and MotUC elements. The back of the package though shows a rather horrible artwork for Merman.  He's not even shown to be blue, which is the colour of the toy, but is his standard green.  Blegh. 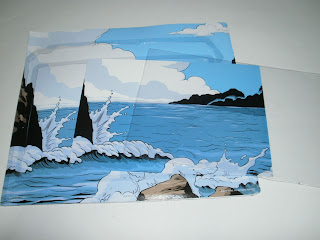 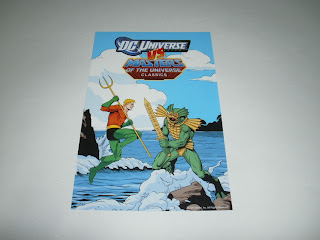 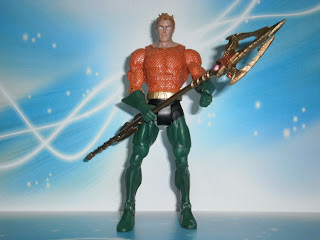 I don't have the classics coloured version of the King of Atlantis, and I must say I like him.  The sculpted scales on this body gives him a rather tactile look.  The paint is glossy and thanks to the shiney-ness, he looks pearlised (Heh, how many fake made-up words are there in that sentence?).  He definitely fits in with the big 3... well, I'm missing Wonder Woman though.  He comes with his trident which looks to be a repainted version of his trident in the single figure. 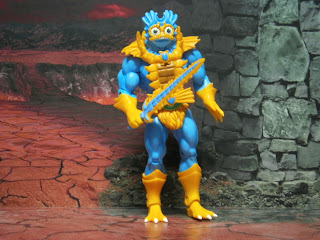 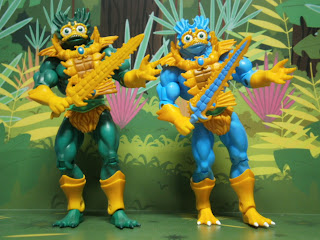 Merman, on the other hand is just a plain repaint.  He's the blue version that first appeared in some of the early minicomics.  I like the fact that his "corn" sword has a painted blue stripe down the middle making it less corny (heh, in both sense of the word).  Otherwise, he's just a repaint of the green Merman, but with painted boots and toes.  I like how they got all the blue on him to match.  He still has the open hand, but doesn't come with his trident (or the second head) which is a pity.  Still he's great for my display and he's going into my Preternia display.
Posted by Novelty at 13:57