I decided to open a second of my first issue Merman to put the golden armour on him from the second Weapons Pak.  Now, I got a spare one way back when to army build because of the second head, and I'm glad that I did! Now since Merman was before I started TaD, I thought it'd be good to include him here just for those of us who's not read about him. Merman has also been reissued, but I didn't get that because well, I don't need them. 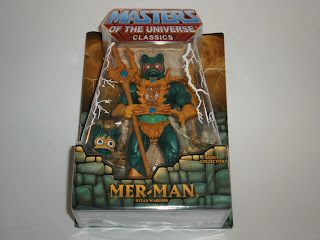 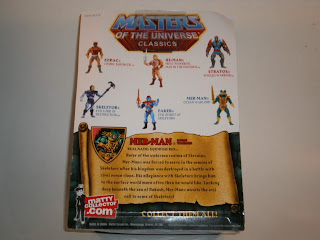 Notice the lack of the "original" starburst!  This is a first-issue Merman.  The back shows the MotUC 6-pack, i.e. the first 6 figures announced in the line and yes, Merman is one of the earliest figures announced.  The story behind this was that the line was supposed to be a series of 2-packs, He-Man vs Skeletor, Stratos vs Merman and Zodac vs Faker.  Well, they junked that concept early on (but did bring them back as DCUC vs MotUC) and so these first 6 figures were sold individually. 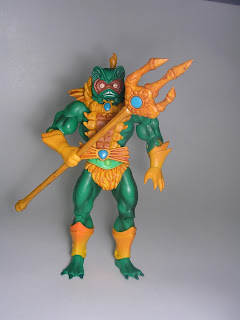 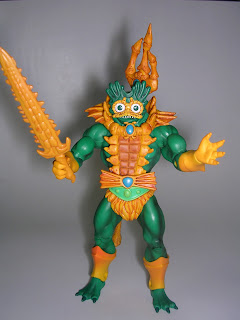 Merman is the first figure to come with two heads, a vintage inspired head and a head that's based on the illustration of Merman on the vintage "8-back" cards.  Merman comes with his armour, a trident and a sword.  I'm glad that it's no longer a corn sword, but it looks more organic and fishy this time around.  The trident is asymmetric and also looks organic, which gets bonus points in my book. 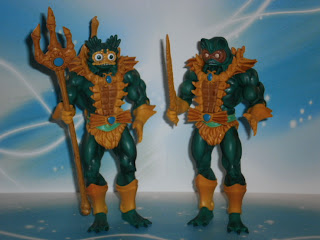 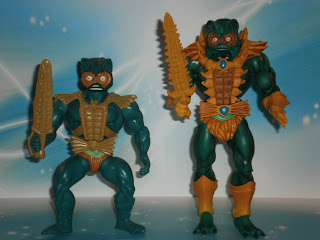 The two heads changes the appearance of Merman drastically.  That combined with the two separate weapons and the body-sharing concept of the entire line almost makes the two Mermans separate characters.  Almost.  It can be seen that the vintage head is almost an exact carbon copy of from the vintage character, but thankfully, the corn sword has been updated.  The armour also has been updated somewhat to be more elaborate with more details. 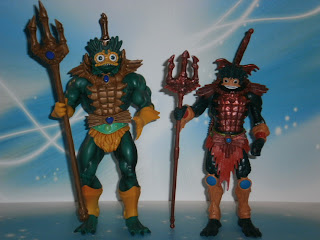 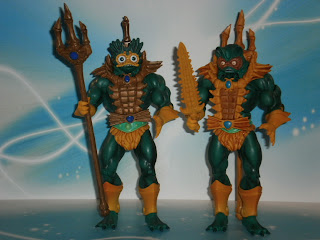 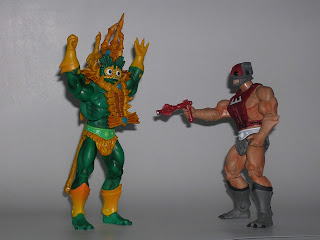