Did I mention that Havoc brought me toy shopping while I visited him?  He knew I was after these Scooby Doo gitd packs, because he mentioned them way back in January last year when I was doing gitd January.  So I picked up two of these gitd packs while in the UK. 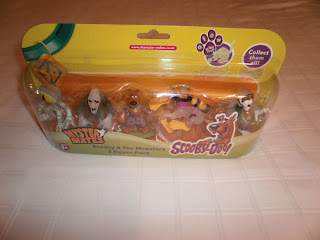 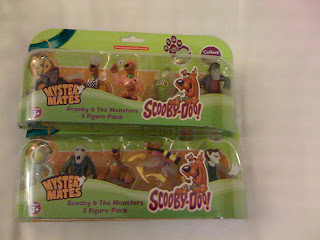 I have no idea how many monster packs are there, but of the packs I got, each one of them had 2 Scoobys and 3 monsters.  The pacakging is more or less the usual Character Options Scooby Doo packaging, but the card is longer than normal to accomodate all 5 figures. 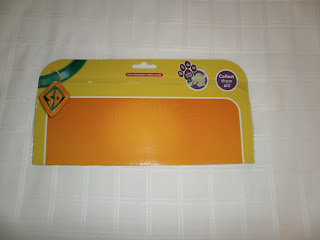 The back of the packaging shows some of the more interesting monsters, as well as the three repainted vans. 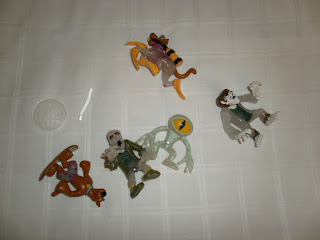 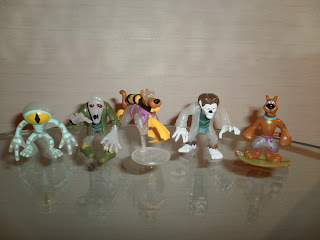 There are five characters in this five pack, a surfboard Scooby, a Scuba Scooby, a zombie creature, an Optikk creature and a werewolf creature.  The shoulders on the werewolf and zombie are articulated, as well as one of the legs on the Scuba Scooby, but the latter is so stiff that it's almost as if it's not articulated.  The scuba Scooby also has an accessory - a two piece transparent/clear stand.  The stand attaches to Scooby rather well, but the joint between the base and the rod comes off rather easily. 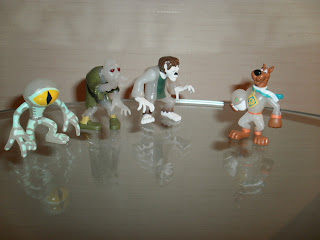 The figures are decently painted, although there's some slop here and there.  The designs and sculpt isn't too bad, but the thing that interests me most about these figures are the gitd feature of course!
Posted by Novelty at 00:07