It's a new week, and it's a new theme... and well, I was going to break out of the boring one DCUC Wave a week theme, but can't seem to help it.  I tell ya, the DCUCs are calling out to me to free them from their plastic prison.  So I guess this week, I'll be opening the Atom Smasher Wave, or Wave 7. 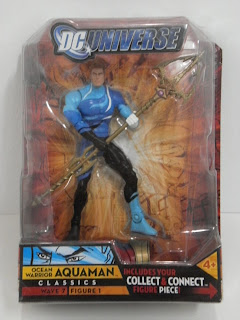 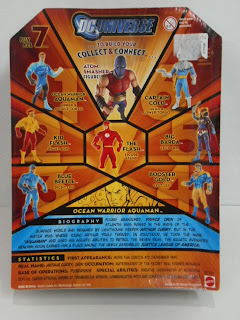 OK, that's not the Aquaman I'm used to.  Aquaman in a blue and black costume?  That's just plain weird.  Aquaman should have the gold and green costume with scales.  Ah well.  The packaging still has the clear bubble in front and the title card at the bottom hiding the CnC piece, although in this case, Atom Smasher's torso is peeking out from under the title card.  The back of the card has been redesigned since there are now 7 figures in the wave instead of 5, and the hexagon is now a heptagon.  Atom Smasher, the CnC is located on the top part of the card, while Flash, the "heavy hitter" of the wave is in the heptagon. 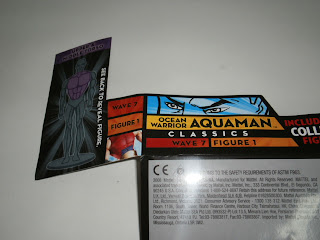 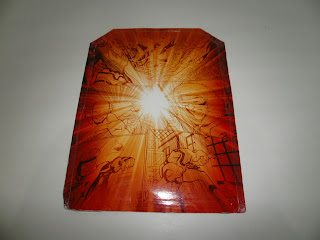 The front of the title card is still the same as Wave 3, and in this case, Aquaman's eyes are just too indistinctive to really stand out on the card.  Those eyes could belong to any dude... or dudette.  The side of the card has been slightly redesigned though, but it's a small design change.  A picture of the CnC piece included with Aquaman is still shown, as well as the illustration of where it fits on the CnC figure.

The front of the cardback has the usual starburst overlayed atop some comics, and since it's a new Wave, the comics are new as well.  Captain Cold seems to stand out prominently here. 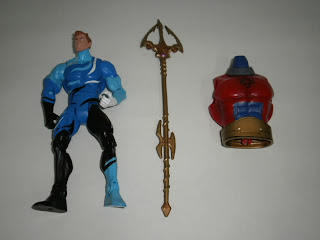 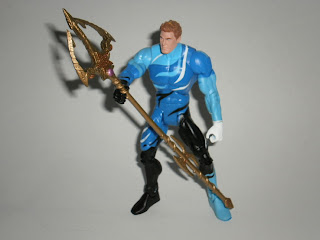 Now, Aquaman comes with a headless Atom Smasher torso and a trident, and nothing else.  The trident is magnificently scuplted with intricate details everywhere.  The bronze colour of the trident seems to clash with Aquaman's blue though, although a silver version would not have stood out.  My copy of the trident was not warped, despite being held by Aquaman in the package. 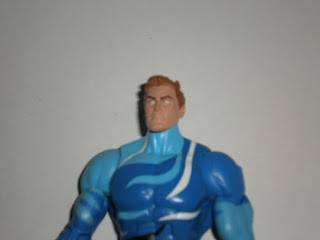 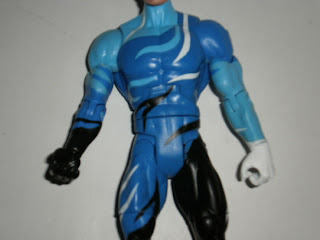 Aquaman uses the standard DCUC sculpt, with the head being the only thing that's new (I think).  This is not the blonde Aquaman that I remember, instead has brown hair thus suggesting that he's perhaps the replacement for the classic Aquaman.  The paintwork on the costume though is nicely done,  the tiger stripes are clearly demarcated and matches in width across the joints. 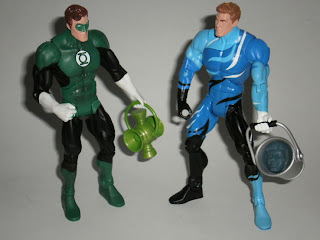 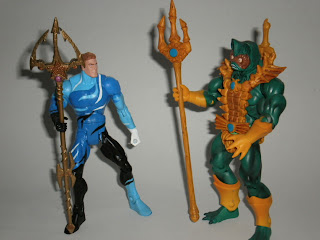 This Aquaman seems to fit in well with the rest of the line, but like the rest of his DCUC brethen is a bit smaller in size when compared with the MotUC.  I'd like an Aquaman (the classic version) vs Merman 2-pack though!  Mattel are you listening? 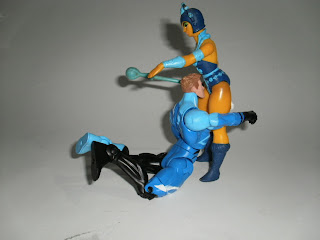 It's an easy decision for Aquaman - back into the box.  I've no attachment to this Aquaman, and I guess I only got him to complete my Atom Smasher.  I know there's the green and gold Aquaman in DCUC, but I don't have him, and I wonder if I should start hunting for him.  Well, I'll see...
Posted by Novelty at 22:19