Finally, a Justice League Unlimited figure for Justice League June, here on Toy a Day.  I guess I'm cutting it close.  There's only a few more days left to June.  Today, it's the dimunitive Atom that's the JLU that I'm opening and so without further ado... 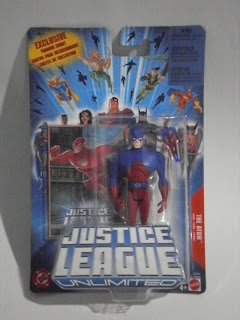 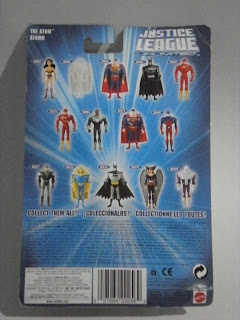 I like the new Justice League Unlimited packaging.  It's small, but it packs a huge punch.  The figure aren't posed in any funny way inside the bubble, which is great, and you can see most of the figure through the clear wrap around bubble.  The back of the box has some of the otehr figures in the line, but the huge chunk of text that takes up almost half the back is a bad design, IMO. 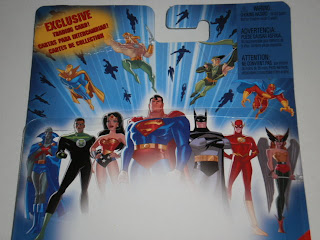 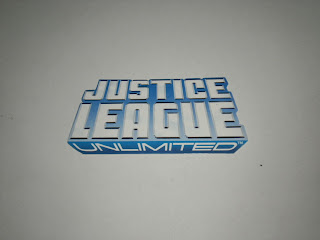 One of the reason why I like the JLU packaging is this excellent illustration on the top of the front of the card.  The Justice League 7 and a whole bevy of heroes flying behind them... it definately demonstrate the scope of the Unlimited part of the JLU. 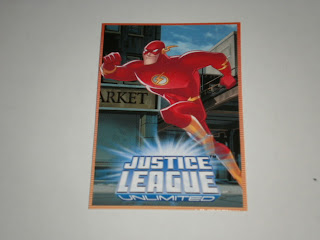 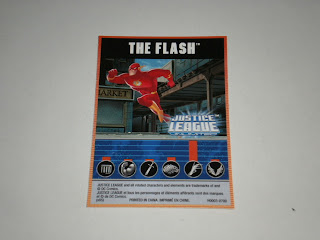 There's also a trading card included with the toy.  I've no idea why it's a Flash trading card instead of an atom trading card, but does it matter?  Yes, I know the Flash and Atom have a strange relationship of sorts, but wouldn't the Atom action figure be better served with an Atom trading card?  Well, God forbid that I understand the thinking that goes on in Mattel.  The card is mediocre in terms of layout - the logo is too big in the front and the stats at the back do not have figures, but the art is great. 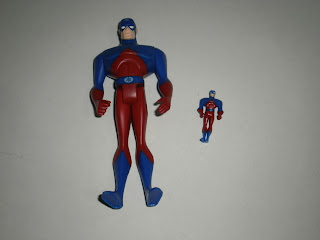 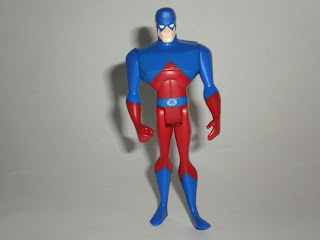 Atom comes with an accessory!  Yes, an accessory in a line that doesn't usually have an accessory.  And in this case, the accessory is actually another figure.  Granted, it's a mini-me version of the Atom, but hey, that's Atom's power, he shrinks to subatomic levels.  This toy is definately shaping up to be fun.

The sculpt is the standard JLU 4-inch body, and I think the head is repainted form elsewhere as well.  The articulation is basic - the usual 5 points around the shoulders, hips and neck.  Look, Mattel, if Hasbro can do G.I.Joes in the 80s with a whole bucket load of articulation for a good price point, I'm sure Mattel can do the same in the 21st century.  Sigh.  Still the figure is great if it's treated as a staction, provided one can pose the legs such that it stands flat, which is not an easy task.  The paintwork is properly done and the eyes and belt bucklet with the logo is sharp and clear. 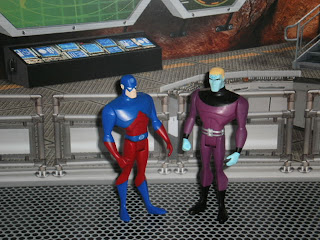 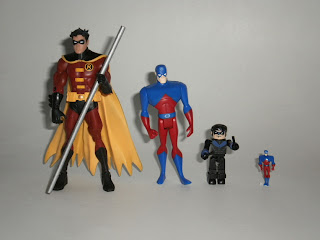 You know what I said about the Atom using the normal body?  Well, I lied.  He actually uses the "teenage" body, the same body that is used on the Legion of Superheroes JLUs.  He's therefore slightly shorter than the usual adult JLUs, but that's fine, because the Atom is generally shorter anyways.  And for comparison, there's a photo above with the 2 versions of Atom compared with the short 6-inch teenage Robin from DCUC and the 2-inch Nightwing minimate. 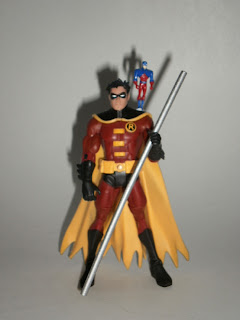 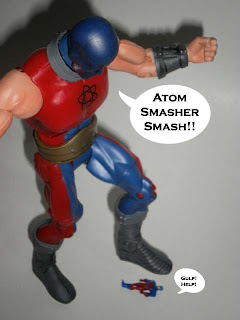 I had so much fun with the atom though.  Did I mention that the Atom is supposed to shrink?  That means this JLU Atom, particularly the smaller one, can be used with other lines.  Atom Smasher smashing the Atom?  Cliche, but it's a great photograph.  I only wished I picked up the Flash sho that I could position the Atom on his shoulders (Robin makes a bad substitute).

And that's the first JLU for this month.  Come back tomorrow, for not one, but a 3-pack.
Posted by Novelty at 00:37