We are still on Wave 7 week here on Toy a Day, and it's Justice League month of course.  It's fast turning into DCUC month though.  Leaguer Aquaman was the toy yesterday and today we have another Leaguer, albeit in his teenage costume Kid Flash! 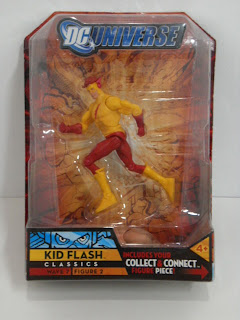 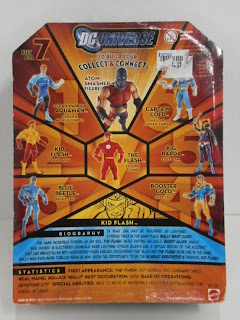 The packaging is the same as Aquaman's yesterday, with a few exceptions.  The cardback has a weird illustration of Kid Flash on the back in the triangle beneath the heptagon that doesn't really seem to be Kid Flash at all - it could be any masked generic character.  Kid Flash is packaged in a "running" posture inside the bubble, which seems weird as well.  I'd rather have him facing the bubble so that I could see him head on (that's for you Lemonjuice) and face to face, so to speak. 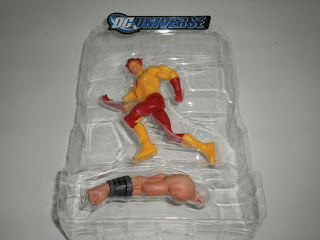 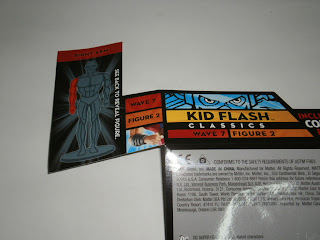 The title card has the same weird pair of eyes from the cardback, and these look better here, although it's still a bit cartoony.  The title card does not hide the peg of the CnC though which is still visible when viewed head on (there's that phrase again, Lemonjuice) through the bubble.  There's plenty of space to hide that CnC part in the tray as well! 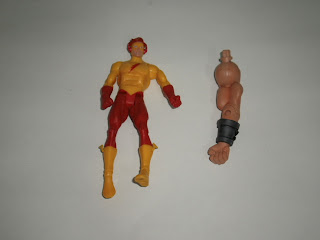 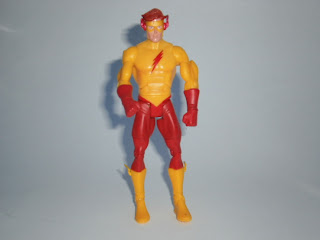 Kid flash comes with.... nothing aside from the CnC part.  No accessories.  He has the usual DCUC teenager body, which means he's small.  Yes, small, with no accessories, which makes him the least value for money figure in the wave.  What were they thinking?  I have no idea.  To be honest, I'm not sure that Kid Flash could have had any accessories though.

My Kid Flash's legs were warped from his running posture in the bubble, which is a pain.  The sculpt is nice though - they added wings onto his boots.  The paintwork is sharp and the joints are tight.  I have no complaints about either. 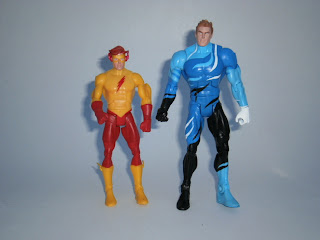 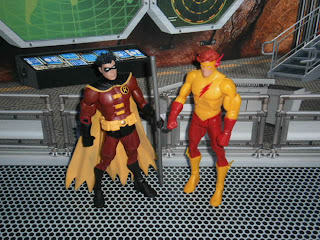 Kid Flash's diminutive size is apparent when placed next to a normal adult like Aquaman.  He looks less like a teenager, and more like some scaled down version of an adult though, which, like Robin from Wave 3, makes him appear to be from a separate line.  When placed next to Robin though, he looks great - and he should since they share the smae body proportions after all.  I guess these teenagers will have to be displayed separately after all, but as for Kid Flash, it's back into the box for him.
Posted by Novelty at 18:31