The thing with Collect and Connect, or CnC is that buyers of an entire wave are rewarded with an extra figure.  For Wave 1, the extra figure is Rex Mason, or Metamorpho.  The parts to build this figure are scattered all throughout the wave and this figure can only be built if the entire wave is purchased.  So he was not opened at one go and thus does not count towards my Toy a Day limit, but I'd still like to do him the justice of a TaD review (of sorts). 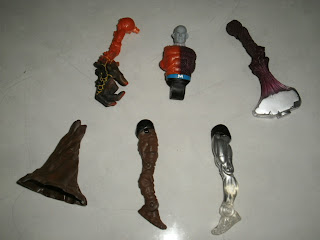 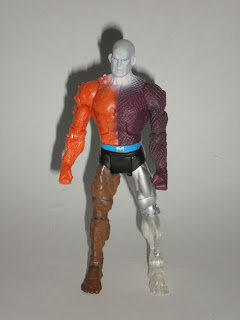 The only history I have of this character is from his appearance in the JLU cartoon.  Guy who got involved in a chemical accident and has the power to transmutate his body to various things.  Hmm... the usual sort of story really for a comic book character.


I've described how he's hidden in all 5 packages in the previous posts, so there's no point rehashing that again.  Metamorpho consists of 8 pieces - a torso, two legs, two arms and three accessories.  He snaps together rather well, and despite the self-assembled nature of the figure, the joints aren't that loose.  The sculpt is highly textured, and each quarter has a different "feel" to it.  Visually each quarter looks different as well, as they are painted different colours, or as in the case of the left leg, sculpted from transparent plastic. 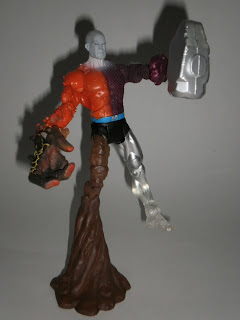 The accessories are what make this figure stand out.  The huge lava hand, the metallic hammer, and the mud fountain elevates the figure into a behemoth of sorts.  Again, the sculpt work on the accessories is excellent, and the paintwork even on the lava hand, is great. 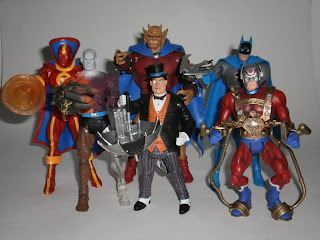 Overall, despite this being a figure built from five different figures, he still fits in to the scale of the other figures, well, mostly - Orion is still the odd man out.  I think Rex will be the second figure to join Tornado on the shelf.
Posted by Novelty at 15:48