#2 by 3B Batman: The Dark Knight Collection, Batmobile

It's 3B from Killer B Hive, back with another guest review on Toy A Day. When Novelty announced his plans for Super Screened September, I jumped at the chance to include something from my collection of superhero movie toys. I gave Nov a short list of things I could review and he picked this prime, vintage specimen: Batman's ride from the 1989 Tim Burton classic! 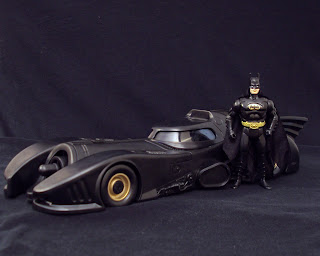 
Batman's had several versions of his Batmobile of the years, probably numbering in the hundreds when you consider movies, animated films, TV shows, comics and graphic novels, etc. But by far my favorite version comes from Batman starring Michael Keaton as the titular hero and Jack Nicholson as the villainous Joker. This thing just wowed my 7-year-old self and still holds up after more than twenty years since it debuted.
Originally, Toy Biz held the license to make Batman-related toys, but a year later, Kenner (now owned by Hasbro) took over the property and released their own, very successful toy line based on the film. The new line was known as "Batman: The Dark Knight Collection" and was heavy on repaints of Batman, some rather ridiculous, but also featured lots of vehicles for the figures. The most sought after being the caped crusader's legendary ride, the Batmobile.

The Batmobile comes in a cardboard box with images all over it and opens from either end. The car is secured in a cardboard tray that holds it in place inside the larger box. I didn't bother snapping a pic of the interior box because it's just plain old cardboard. 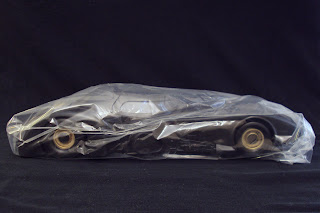 The car is wrapped in a plastic bag and is for the most part assembled. You basically just have to snap on the fins and it's ready to go! 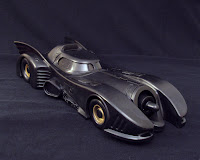 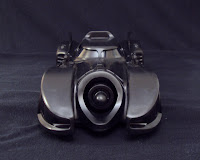 You have to admit this thing looks menacing! The sculptors really went into a lot of detail on the exterior of this baby. I wanted to include comparison shots with Toy Biz's mobile, but I just couldn't get the right lighting set-up with both vehicles in the same shot. However, Kenner's version blows the other one out of the water and it goes beyond just the closed cockpit. This thing doesn't look like a toy, rather a scale model of the actual vehicle. 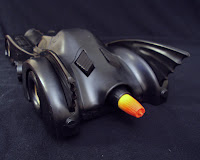 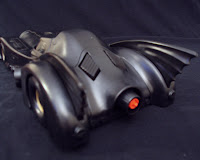 Here is one of the coolest features on the Batmobile: the exhaust flame! You press either one of the buttons on the rear of the car (disguised as vents) and a "flame" pops out of the exhaust, just like in the movie! And it spins as the rear wheels rotate. That's a small detail that adds a lot to the overall appearance and I'd like to note that later Kenner (and even Mattel) Batmobile toys totally omitted this kind of feature, usually opting to go with a flame sticker inside the exhaust. 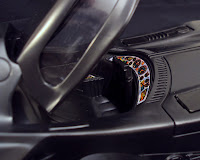 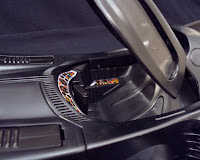 The canopy opens via a hinge at the top rear. It's completely unlike the film which featured a cool pop and slide motion towards the hood of the car. I'm sure that would be a costly mechanism to create for this toy, but would have been a really nice feature (given the flame and all). Also displayed in these photos is the main downside of this Batmobile: it's size. 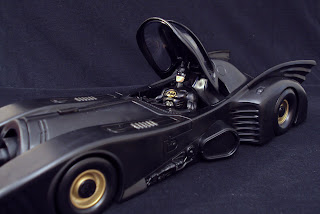 It is really undersized, I mean, look at it compared to the Batman figure. And because of it's size, it's relegated to being a one-seater vehicle (like many of Kenner's later action vehicles), which is unfortunate because now Bats can't give Vicki Vale a ride, then again, they never made a Kim Basinger figure, to my never-ending lament...
Anyway, there is some detail inside, mostly the sculpting on Batman's seat, everything else is resolved with stickers you apply yourself. 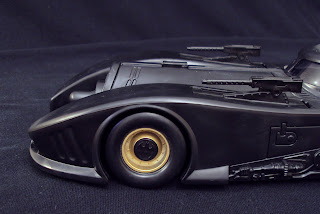 And what would the Batmobile be without weaponry? Just another flashy car, right? Not this baby, it's loaded with Thompson machine guns (just like the movie!) hidden under each fender. These babies flip up when your press down on one side of the panels on top of the fenders and are ready to mow down bad guys! What a minute... that doesn't sound right, oh, right, they just mow down warehouse doors. The Batman would never fire fully-automatic weapons at criminal scum (however, he has no remorse for blowing them up inside a chemical factory). You probably wouldn't exect it, but guns are very nicely detailed and really add to the car's intimidation factor. 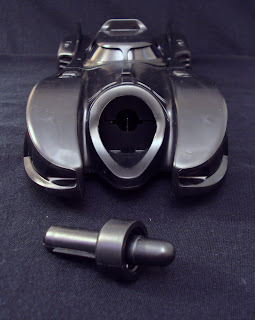 The Batmobile also features a spring-loaded, turbine missile, triggered by a not-so-inconspicuous button smack dab in the center of the hood! It's completely made up just for the toy, but it's still a fun addition, although it doesn't fly very far when fired because of it's bulk. 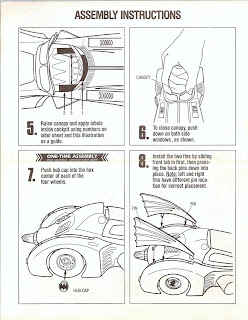 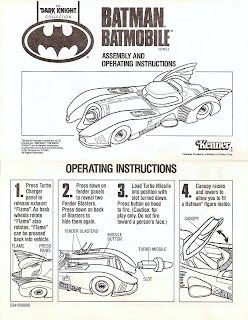 Of course, Kenner is happy to include an instruction manual to help you put the finishing touches on your bat-car once you pull it out of the box. Also note the use of quotation marks when they refer to the exhaust flame. That's hilarious, like someone would actually read it and believe fire was going to shoot out of the toy. Although, that would be wickedly cool!
I have an action figure version of each of the Batmobiles from each of the live-action Batman films and several of the animated vehicles, including the Legends of Batman white Batmobile and even those zany "quick change" coupes, but this toy beats'em all! The smaller size is a bit frustrating in terms of scale with the figures, but the Batman Returns Batmissile is nearly twice as big and it's still a one-seat vehicle, so size doesn't matter in the world of action figure rides. It still makes for a fun movie-related toy and looks great on the shelf. Hmmm, I think it's time to revise my displays...
Posted by 3B at 13:00