Another day, another JLU three-pack.  These 3-packs were scheduled for Justice League June, where somehow the DCUCs just crowded them out of.  Anyways, today we take a look at episodes 459's 3-pack which features Aquaman, Wonder Woman and Batman. 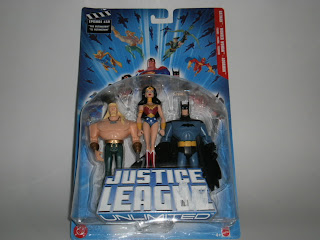 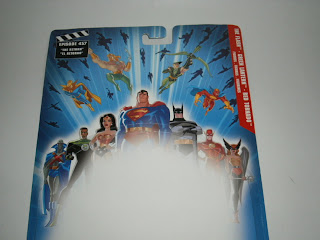 The packaging is the exact same as the 3-pack yesterday, right down to the back of the card.  The only difference are the text which describes the figures in this pack.  Surprisingly, the three names of the figures in the pack of this line are not splashed in a large visible font, but is rotate to the side of the top of the card.  I guess with icons such as these figures, there's no need to state their names. 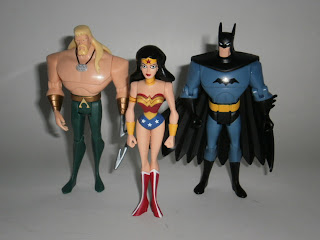 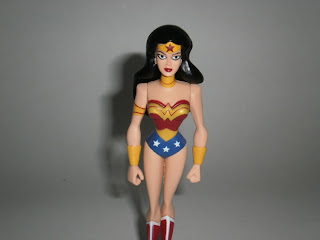 Out of the package, the figures look even nicer than in the package.  Wonder Woman looks like how she was depicted in the cartoon and loving care has been taken with her paint to show off her face and her costume design.  The only failure for her is that she uses the standard female JLU body, which is way too slim and is top-heavy, especially with those really slim legs.  She tend to fall over very easily. 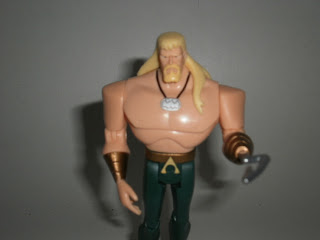 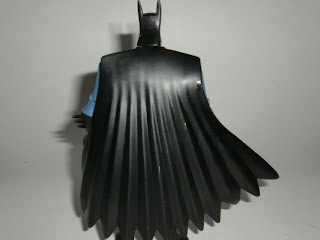 Aquaman comes iwth a hood for his left and hand long hair.  The hair on the sculpt prevents his head from rotating.  The pendant around his neck is sculpted on to the body.  Otherwise, the paintwork on his standard JLU body is done rather well.

Batman also has the standard body, but is given very pointy ears and an accordian-like cape.  There's close to no paintwork on his standard issue JLU body, but what little there is is tampographed on well. 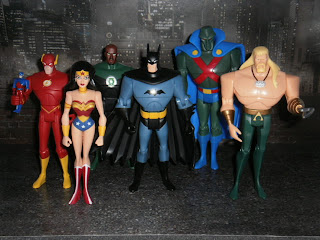 So there's another three of the Magnificient 7.  Add in Flash and John from yesterday and the Manhunter from June and that's six of the seven.  All that's missing is Supes.
Posted by Novelty at 00:59