It was a hard choice, but since I counted the two Orkos separately, I guess I will have to count both Whiplash separately as well.  We are still on my Super Screened September, but there's a quick interrupt this week as I open Orko, both these Whiplash and Mo-Larr tomorrow.  I guess that will push a few of the scheduled toys into well, not October, because that month is solidly booked as well.  Maybe November.  Anyways, let's get to Whiplash! 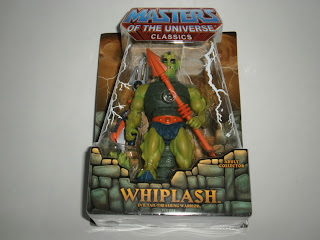 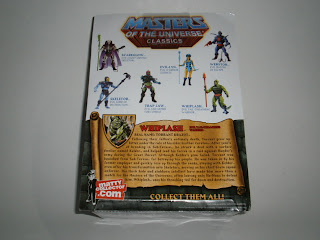 I'm opening two figures at one go, but will only photograph one of them... well, unless I have a reason to do both of them together.  The reason is that I'm videoing (is that a word) the opening of the second Whiplash, and that will go up on Facebook.

Whiplash comes in the standard MotUC packaging.  I'm not too keen about his pose in the bubble - the spear obscures part of his face which may be how it was done almost 30 years ago, but in this day and age, well, they could have improved it.  Partially hidden from view are the millennium stuff - the head and weapon is to Whiplash's right in the bubble, but they do not take any pride of place or anything - in fact, there are mostly hidden away.  It's weird to see them packaged so, it's as if Mattel was trying to send some sort of statement. 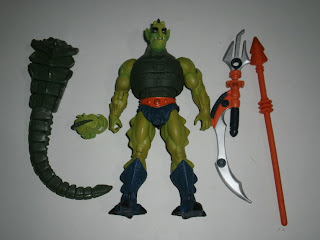 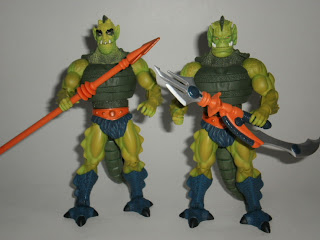 Whiplash comes with a whole lot of stuff - He's like double the plastic available in Stratos!  There are enough parts to make both his vintage version and the millennium version.  Oh and the tail is detachable.  The paintwork is minimal, but what is there is done rather well - particularly on the face.  The sculpts has scales on the shoulders and upper arms, another nice touch given to the figure.  Whiplash's feet has the scalloped sides and the three toed feet have both the calf and ankle articulation points! 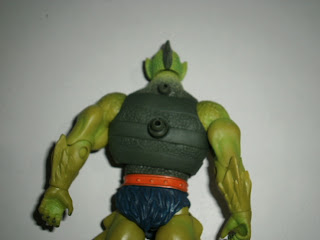 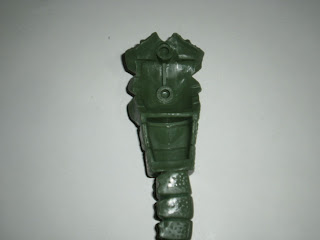 The tail actually fits onto a specialised back piece on the figure that has two pegs.  The holes on the tail piece (HA!) are a little small and tight (double HA!), and it takes a while learning the trick to put them on.  Consequently, because of the weird torso construction of Whiplash, he seems skewered somehow, as if he wasn't put on straight.  The torso, however, does not obstruct the "ab crunch" articulation point.  The tail also has an additional point of articulation part way down, which is a nice touch. 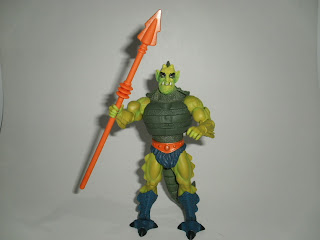 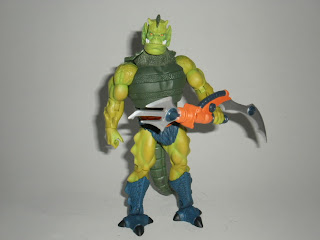 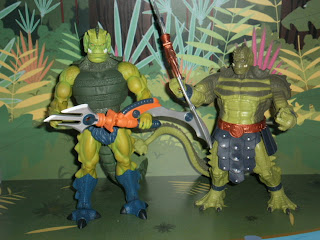 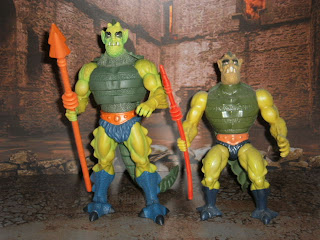 Comparisons to the former versions of the characters will see that the body of the figure is based on the vintage version of the character.  The millennium version would require a new loincloth piece, naked feet and light green strips going across his chest.  I guess the paintwork could be easily done, although the loincloth might be a pain to make. 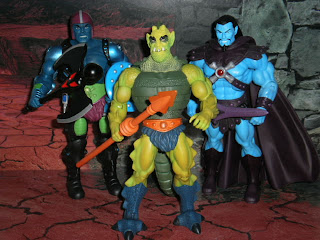 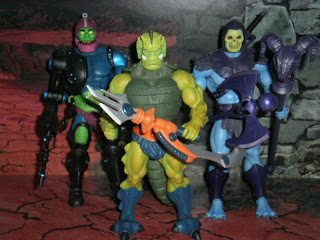 Overall, both versions of the figures fit in rather well with the other characters in the line and would be an addition to the entire line, irrespective of which version is preferred.  I'm sure glad that I got two different copies of him!
Posted by Novelty at 00:46