OK, so I'm supposed to be on a JLU continuation week, but since I got my Carnivus yesterday, I decided to open him and Gygor today.  So that's what's interrupting the JLU week of Super Screened September, but that's usual, as the MotUC stuff usually intrudes into the themed weeks anyways. 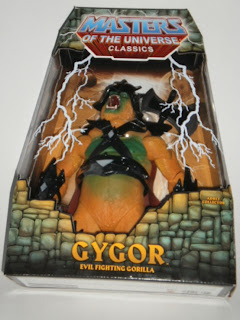 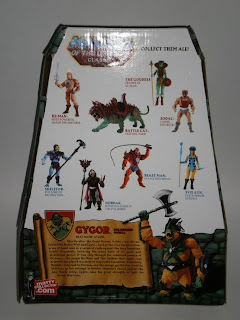 Gygor came in an oversized box that's similar to Tytus's box, but isn't as big.  Gygor is posed in the box in such a way that he's framed by the lightning on the window.  His feet and arms are hidden by the title card though, and there seems to be quite a bit of wasted space above his head.  The back of the box features his bio, with a picture that reminds me of Mossman thanks to the colouring. 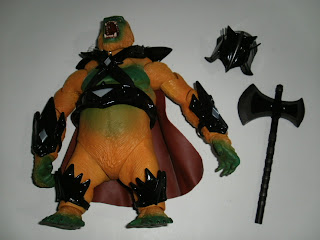 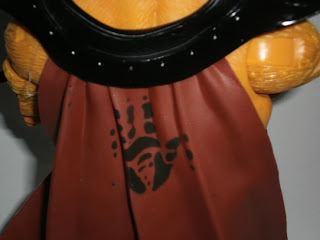 Out of the box, the figure is heavy, but not really that impressive.  It's just a big yellow and green gorilla with armour.  The armour is removable, and has quite a bit of sculpting, but because of the choice of black colour and the lack of large amount of paint highlights, the detailing doesn't stand out on the armour.  The paintwork, what little there is is good on the figure, including the tampographed black hand on his cape. 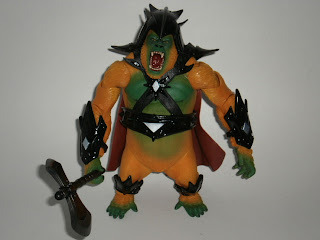 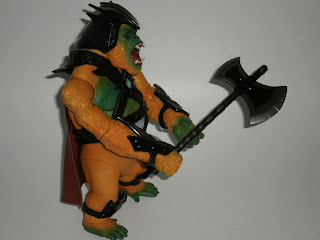 The figure itself is sculpted with fur, but this is hidden by the armour where he does wear armour.  There's more articulation on Gygor than on Tytus, and yes, Gygor can hold his axe with both hands.  However, the axe seems to be designed for a smaller grip than what Gygor has.  Where Gygor fails in terms of articulation is at his groin with the V-swivel joints.  He would have benefitted from ball joints there, and perhaps knee joints as well, both of which are missing from the figure. 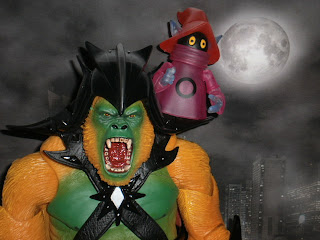 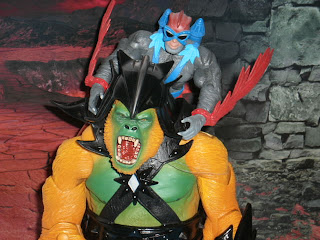 He's tall, he's a monkey, and it would be rude to spank him to make him harder.  His helmet alone is almost as big as Orko, and he stands heads and shoulders above most of the "normal" MotUC figures.  I'm not sure whether he would fit in with the rest of the line, but that's because he's the first big beast that's not also a ride.  Perhaps when the Shadow Beasts join him, he'll fit right into the rest of the line... or perhaps not.
Posted by Novelty at 00:52