It's September, and I start the month dedicated to toys with links to both an animated series and a big screen release at the movies.  And what better toy to kick start the month than Shredder, of the ninja Turtles fame?  Welcome to Super Screened September! 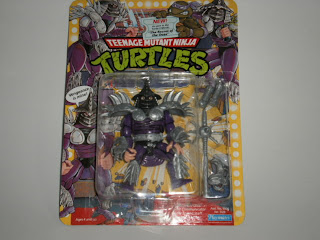 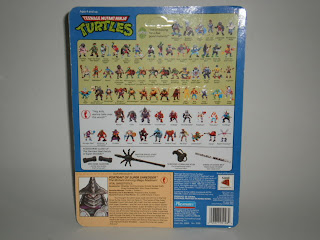 Shredder comes on the usual TMNT card of the time - I like the multiple illustrations of the character on the front.  There's even a ticket stub near the top promoting the tie-in to the second Turtles movie.  That's a good sign.  The back of the card is really crowded - are those really all the toys in the line? 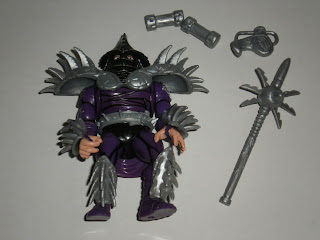 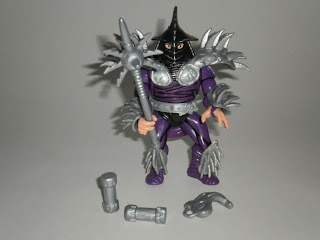 Shredder seems a lot more crazier in this incarnation of the figure.  He's all decked out in porcupine spikes.  Yeowch.  The design of the figure is also a bit weird - I mean, does those 2 blobs on the front of his torso look like boobs to you?  The helmet is non-removable, and neither are the bits and bobs that's actually moulded onto the character.  I guess I should be happy that his joints didn't fall apart.

Shredder comes with 4 accessories (Hey, it's Playmates) - a mace, a radio and two canisters of ooze.  The mace has some level of detail, and looks more like a cross between a morning star and an axe than a proper mace.  It's good and it matches this Shredder's design perfectly.  the communicator is so-so and it seems designed so that it can fit onto Shredder's other hand, but I didn't try because I didn't want the character or the accessory to fall apart.  The two canisters actually look more like dumbbells than canisters, but they are just extra, I would guess. 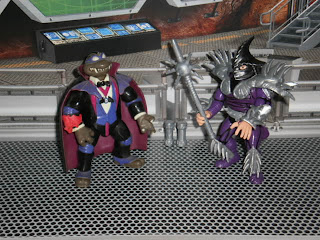 Despite the wackiness of the character, I think it really stands out when place next to the other turtle figures.  He's still going back into the box though, and I hope his joints doesn't break in there.
Posted by Novelty at 00:28