3We are coming to the end of the month, and to close out Super Screened September, as part of this Justice League week, I thought I'd do this four-pack - the Gotham City Criminals.  This will also nicely tie-in to Monster October, since I do have the Scarecrow in this four-pack. 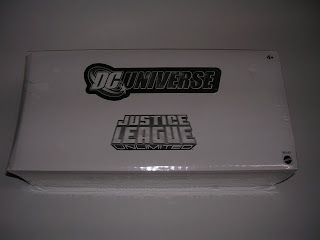 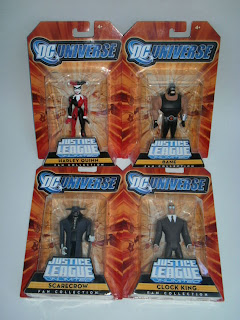 The four-pack was only available at MattyCollector.com and comes in a white mailer box.  There were three of these four-packs, but they were discontinued as their sales were disappointing, according to Mattel.  The packaging is reminiscent of the DCUC packaign with the starburst in the background - even the title card and the logo looks about the same.  The only difference is the size as these are JLU figures. 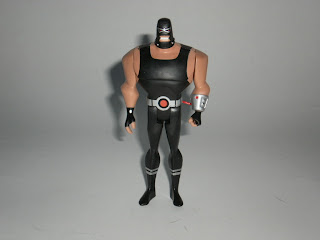 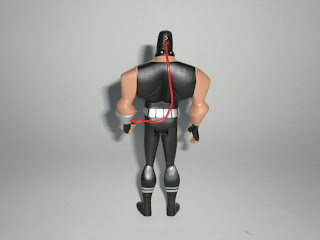 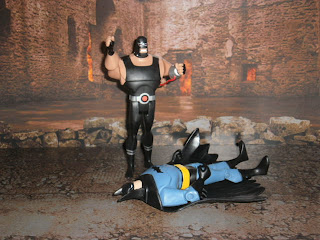 Bane is probably the nicest figure fo the four.  He has the usual 5 point of articulation, but the head sculpt and the paintwork is done flawlessly.  My favourite part is the wire that connects the back of his head to his gauntlet.  They did  not have to add this detail, but they did, and it makes for a nicer figure overall. 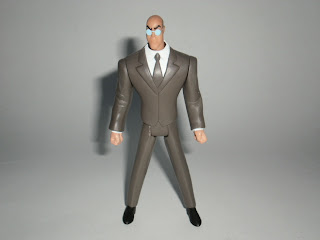 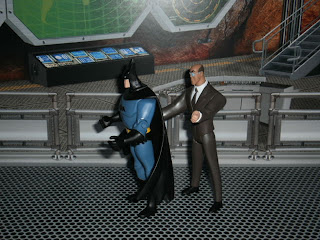 The Clock King is just a bespectacled guy in a suit.  Nothing special there, except that the suit is not painted on, but is sculpted onto the torso.  The paints are minimal, but where it is painted - the white of the shirt, particularly on the sleeves and the glasses are superb. 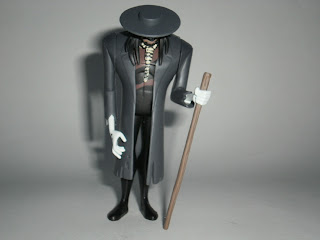 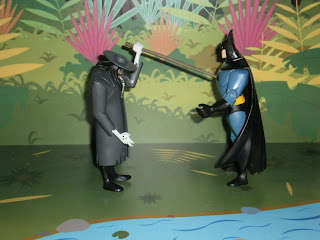 The Scarecrow is really scary thanks to the sculpted hat and trenchcoat and his bony fingers and skeleton like tie.  A lot of sculpting went into the figure and while the paintwork isn't as clean as the Clock King or Bane, it's still good.  Again, they gave him a stick as an accessory, and despite the fact that it's not removable, it's nevertheless a welcomed accessory and sets him apart from the cookie-cutter figures of the line. 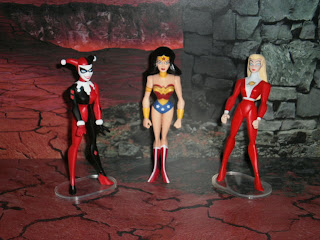 The final figure of the four is Harley Quinn, and Oh boy, that sculpt and paintwork is among the best of the Harley Quinns in toy form.  She has the thinner than usual female legs, but these aren't as thin as Saturn Girl's or as close together as Wonder Woman's.  She stands very well, even without the stand.  The head sculpt is bright and cheerful... and scary, as befits her character and the paintwork really highlights all the niceties of the figure.  Her sculpt is such that the boobs look a bit oversized on her, but that's not really a complaint for any hot blooded male, is it? 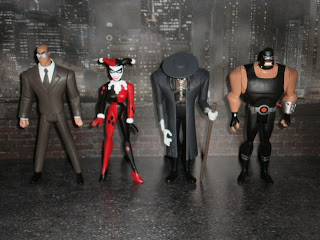 Overall, yowsers!  Taken together these four present a serious and dark side of the JLUs and like all JLUs is excellent for display on a shelf.
Posted by Novelty at 00:43