I was never a huge fan of the Turtles.  They were just way too out there for me.  Consequently, while everyone was into the turtles craze, I was quietly looking at alternatives - such as the second wave of ThunderCats figures from LJN.  And because the market was flooded with Turtles stuff thanks to the craze, I was able to pick them up for under a couple of bucks a few years back... including this cannon. 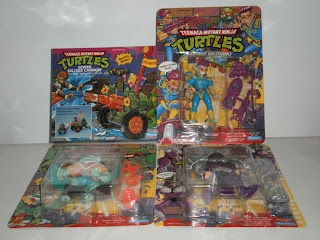 And that was my haul of Turtles loot way back when.  I've opened all 3 of the figures in the past 3 days.  Today I'm opening the only vehicle that I have, the Sewer Seltzer Cannon 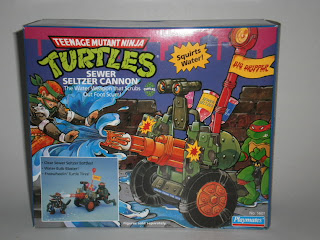 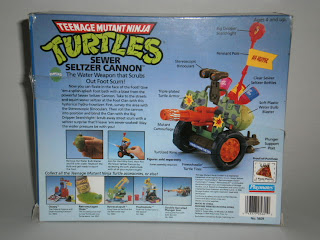 The box still harkens back to the 80s, with an illustration on the front and a picture on the back with the action features shown in insets.  The back of the box is a bit too plain, and the other toys in the line is missing.  They could have showed that somewhere. 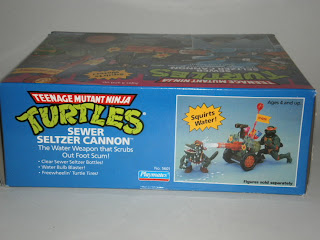 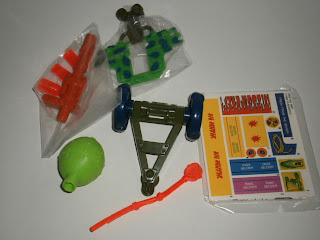 The vehicle actually comes disassembled and has to be put together.  The instructions are not too clear as to how to put the vehicle together, but since this isn't rocket science, it can be figured out by someone who has average intelligence, but one has to wonder whether a child would be able to do so.  And there's an entire sheet of decals for the toy, which I'm going to decide to leave it off the toy since it'll only peel in future. 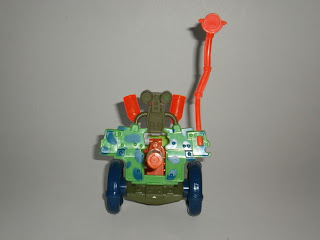 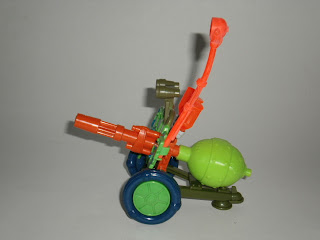 The toy is interesting and is a good collection of brightly coloured plastic.  Orange and lime green predominate and that gives it some character.  Water is filled into the lime green bulb and is squirted through the gun when the bulb is squeezed.  The connection is not exactly watertight, and it leaks a bit on play.  Then there are other bits and bobs which are absolutely pointless.  It's a pity that they didn't allow for a turtle to be able to sit on this vehicle though. 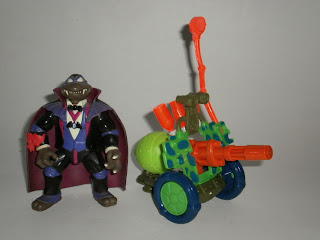 Overall, this vehicle isn't too bad.  It was probably created because of the "hotness" of the entire turtles line, where anything with a TMNT logo sold well back then.  Well, almost everything, as I said in the beginning, I picked this up cheap a couple of years ago because it didn't sell back then.  And we come full circle.
Posted by Novelty at 00:53