It's Thundercat day!  Wait, that's not true.  Well, Mattel was asked whether they'd get the Thundercats license.  They didn't, but they decided to make this figure instead.  I have no idea whether it was sour grapes or in jest. 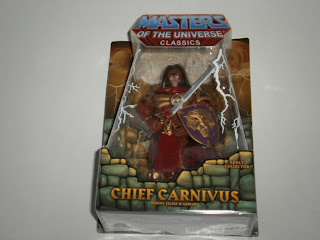 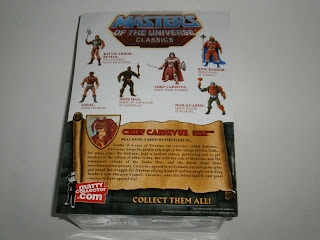 Carnivus comes on the standard MotUC package, and he's displayed int he bubble with his shield and sword displayed for all the see.  The back of the card has figures that PapaTaz still needs to get.  It's really not fair that Mattel won't ship to certain countries.  Another fail for making the toys as widely available as possible.  Who is Carnivus?  He's the leader of a race of feline people introduced in the MYP cartoon; a brand new creation without any ties to the past and he contrasts with his matty release er... mate, Gygor, who has such long ties to the past that nobody knew anything about. 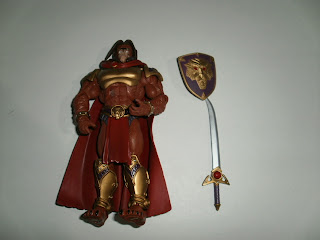 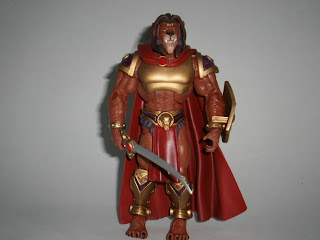 Carnivus comes with his standard two accessories, or is it just two?  Actually, the cape is removable and so is the armour, so that's actually four pieces of accessories.  The figure is mostly the Beastman sculpt with  He-Ro's shin and a few new pieces including the head and loincloth.  The articulation is MotUC standard, but the hair hinders his neck articulation somewhat.  The paintwork, particularly on the bracelets could have been better, but this is still one of the better figures in terms of paint. 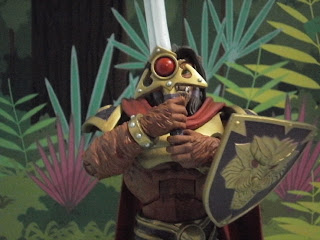 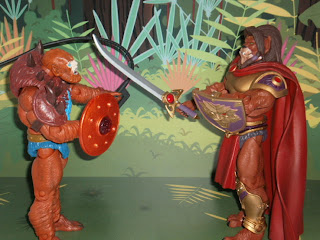 Carnivus comes with the Sword of Omens Saz, which with the huge red orb on the rain guard, that seems to scream "Hoooooooooo!" (and no, I'm not referring to Lemonjuice either).  There is a crick to the sword near the tip with the point being offset somewhat from the blade.  The paintwork on the sword is passable and it does match the armour on the figure, so it doesn't look out of place.  The (nameless) shield has an image from the central tower of Eternia emblazoned across it, which is a nice detail, but raises some questions as to why it should be there.  It clips on to the wrist and because of that is an immediate favourite of mine as it leaves the hands free.  It can move some, but is also very secure on the wrist. 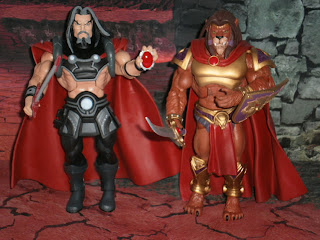 And the hyper anime detail (Mattel should really trademark that phrase) on the figure's head?  Well, it's just the way his hair is sculpted, and is on par with figures such as Marzo (who has a straight sword instead of a bent sword, so take that which ever way you may).  Carnivus doesn't look too different from, say Randor or He-Ro, or humanoid figures like Merman or Stratos and fits in, in my view, with the rest of the line.  Now that we have the second member of the Eternian council, when will we ever get Lord Dactys or Queen Andreenid?  I wonder though if they will rename the Queen to a Lady or something...
Posted by Novelty at 00:27