If Animated August had Transformers Animated as the tentpole of the entire month, this month, it's Dick Tracy propping up the show with 12 - count them - twelve figures to be opened that's part of the theme.  Now, I know nothing about Dick Tracy having neither watched the movie or any related media.  I picked up all these figures for like $5, for the whole lot a while back.  It was cheap. 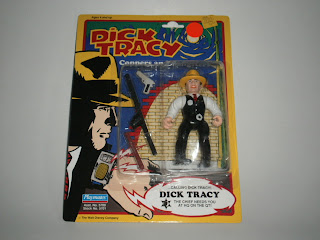 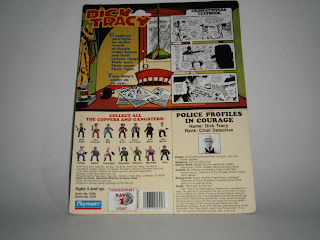 Well, let's start of with the eponymous figure for the line - the star of the whole show, Mr. Dick Tracy himself.  I know the name harkens back to a bygone era, where Dick was a normal guy's name that doesn't make anyone snicker behind his back or make fun of him to his face, but still I wonder if he would have been more popular if the name was a little less "funny".  The card is colourful in the front, with Dick's 60's portrayal there on the front.  There's no title card, but the name of the character is printed on the bottom.  The bubble is clear all throughout, and reminds me very strongly of the packaging for the Turtles, also from playmates.  The advantage of this bubble is that the accessories are displayed nicely next to the figure.  The back of the card has a bio, the other figures int he line, and a comic strip on the top right, which is a nice touch. 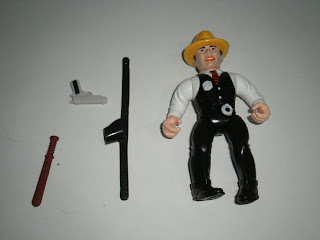 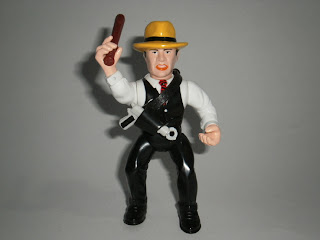 Dick has 7 points of articulation, all of them swivel - neck, shoulders, wrists and hips.  Because of the lack of knee and elbow articulation, the pose is pretty much unchangable.  The sculpt reminds me of the bobble head dolls actually and the Turtles as well, with the head being way too big for the body.  There is some sculpted details on the torso, which is a nice touch and those are highlight with the paint. The paintwork on the body and face is nice, but there is some slop on the hat.

Dick comes with a gun, a gun belt with holster and a baton.  Now I have no idea why, but Playmates decided to give Dick three very phallic accessories.  The baton is a long stick that's brown.  The pistol, doesn't shoot, but does have some black paint to give it detail.  And the gun holster isn't phallic, well, not until one tries to put the little peg into the hole to close the loop - the peg has a bulbous head on a slightly more slender shaft, and appears to be a stiff little... dick.  The idea that it has to be pushed through the hole, well, seems way too much for a kid's toy.  Or maybe I'm reading too much into this.  But it can't be helped with a figure named Dick. 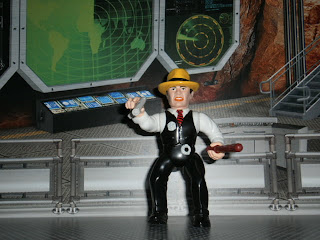 The gun belt is way too long to be worn around the waist, andthe gun can't be properly held in either arm either.  Consequently, together with the weird pose, he just looks weird displayed.  Still, he was made to be played by little kids, not displayed, although, with that name, and his accessories, I wonder if the designers was trying to send some sort of suggestive ideas to the little kids.  It's probably a good thing that those vocal conservative Christian groups didn't get a hold of this Dick, or examined it too closely.  They'd explode otherwise.
Posted by Novelty at 00:58