As I mentioned yesterday, the only JLU that I have left to complete my Magnificient Seven is Supes.  Well, here he is today, a JLU in a slightly different packaging. 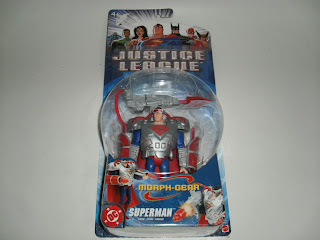 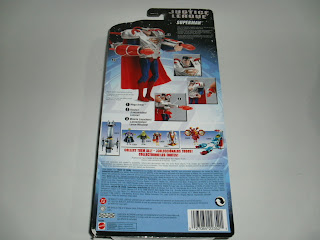 This Superman is part of the Morph-Gear JLU subline.  Basically, it's a JLU figure with a huge accessory that could be worn two different ways.  The packaging has the usual JL7 on the top, with the logo underneath it, all of which is still above the bubble.  The bubble, is round, which is an intersting shape on a rectangular card.  Underneath that is the title card, and that's messy with way too much going on on it.  Superman's name is lost in the mess. 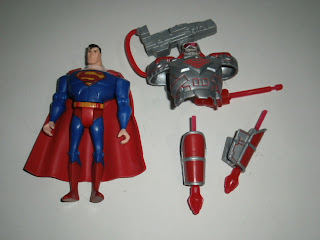 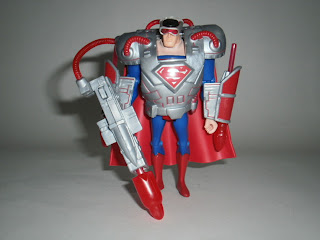 Out of the package, there's the usual JLU Superman figure, and a whole lot of bits for his armour and weapons.  The entire Morph-Gear backpack makes the figure top heavy and he has balance issues when wearing the armour.  What is nice about the armour isn't the firing missiles from the forearms mounted launchers, or the hose that connects the right launcher to the back of the armour, but instead is the nice visor with clear red plastic that is attached to the armour (so that it won't get lost), yet it fits nicely on Superman's head.  Why Superman would need armour or missile launchers, is a different story. 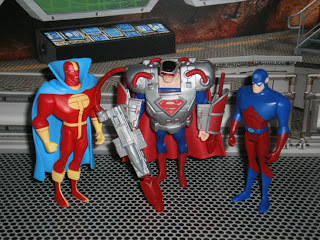 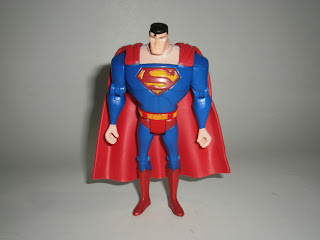 The figure itself is muscular - the Superman symbol is sculpted on instead of being tampographed on.  The head sculpt resembles Superman's appearance in the cartoon, and is simply painted.  The cape is a nice flowy piece that does not detract from the figure.  What does detract are Superman's very very skinny legs which makes him look like a paraplegic from the waist down.  Consequently, he's top heavy and has balance issues standing up.  The Morth-Gear doesn't help there either. 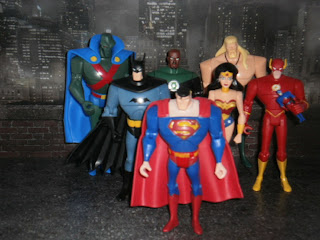 As I said when I opened Flash et al a couple of days ago, these figure aren't for adults to play with- they are mostly there for collectors to display and little kids to stimulate their imagination with cheap toys.  And despite the fact that I now have the Magnificient Seven that I want, I guess they will go back into the box until I have a better reason or the space to display them.
Posted by Novelty at 00:40