Today is Thrawn's day, and if he posts a comment with the word "gimme" in this post, I'll give him an extra ticket for the contest.  Well, it's been Dick Tracy Fortnight for so long that I've lost track of how many days are we into it... I think Pruneface is the ninth figure of the line.  Welcome to Super Screened Sepetember here on Toy A Day. Pruneface comes on the normal Dick Tracy card.  What's new to talk about the card?  Well, this is the first carded figure that seems to have given the character a pose in the bubble.  He looks as if he's running.  Also, the detonator accessory seems to have two eyeballs with eyebrows in the package, and reminds me of a Pokemon thing. 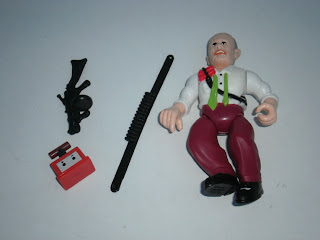 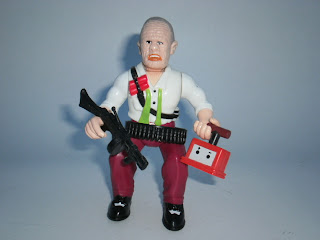 Out of the package, well, it's the usual story - figure and three accessories.  The sculpt on the figure has the usual details on the torso and head, but in this case, he does really have a prune for a face.  However, because of the way he's painted, the lines of the face aren't really visible at a distance.  The paint is not as garish as some of the other figures, but the maroon pants with the lime green tie clashes so much that it actually looks good.  The paintwork is a bit shoddy on this figure, but it's still acceptable. 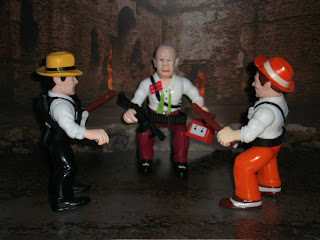 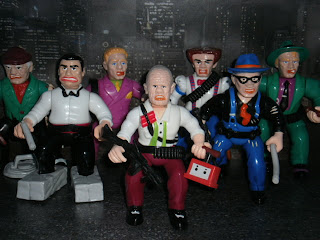 Pruneface comes with the gun and the gunbelt with the penis-shaped peg that also comes with a few other figures, as well as his Pokemon creature.  Pruneface is not as garish as some of the other figures and seem to fit in well with the line, but his face sculpt always reminds me of Hannibal from the A-Team for some reason.  Oh well.
Posted by Novelty at 00:52