Every month, I have such big plans, but alas, something always gum up the works.  And the something usually takes the form of Masters of the Universe Classics.  Well, here's a picture of the toys I have scheduled for October, but there are more than 30 pieces, which means not everything will get opened in October.  And I'm sure I'll get more MotUC to open in October (Chief Carnivous and Gygor are the chief suspects), so in reality only about 28 items in the picture below will get opened. 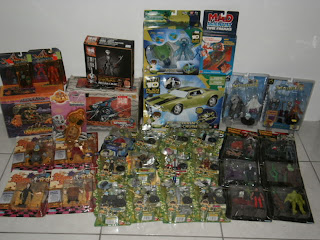 The main event of the month, if it's not obvious from the picture above, is Ben 10.  There are 14 Ben 10 toys above, 12 figures and 2 vehicles.  I'm also looking forward to the Swamp Thing figures (6 figures) as three of them have gitd.  The other gitd figure in the picture above is the Muppets Uncle Deadly.

I've also done a bit of site clean-up.  The list of labels on the left, is now organised alphabetically instead of by frequency, and should be easier to use.  I've also chopped off a large portion of those labels from the list in the left, but fear not, those labels are still there.

I've also put up the list of Animated August reviews - that's located to the top of this page.  And while doing that, I've moved the List of MotU stuff that I'm looking for to a post, and merged the About This Site post with the Vintage vs Millennium vs Classics post, as Blogspot only allows me to have 10 posts there.  I've also updated the About pages a little bit and included links to Killer B Hive and Poe Ghostal.com.

Then of course, I've had the task of hunting down every single non-functioning like to Is It Fun? and fixed those links - well, I've fixed some of them, but where the link are to entire reviews, I've either included the entire review in the post or created the reviews from scratch.

October is gonna be a great month, despite the theme month not having alliteration.
Posted by Novelty at 00:21