And I conclude my mini-MotUC run today with Mo-Larr and Skeletor, the last of my August purchases from mattycollector.  OK, so Mo-Larr has neither connection to a cartoon or a movie, but he did appear as a custom character in the TV series Robot Chicken.  Not many MotUC fans considered him a "must have", but since Mattel has decided to officially make this figure and place him in the line, he's more cannon than most figures. 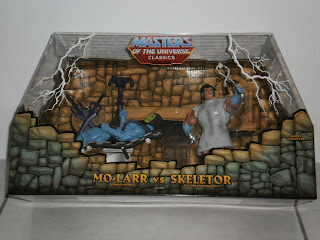 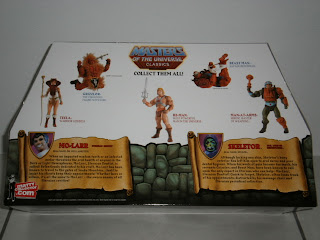 The box is one of the nicest part of the whole thing.  The front of the box has the usual MotUC elements, but the clear window showcases the contest.  Mo-Larr is posed  triumphantly with the extracted tooth, while Skeletor is posed on what appears to be a dentist's chair.  The background has a fireplace and a window of sorts, and fits right into the theme.  It's almost as if one was looking at the scene through a window. 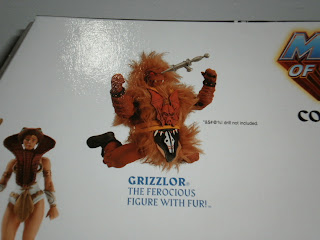 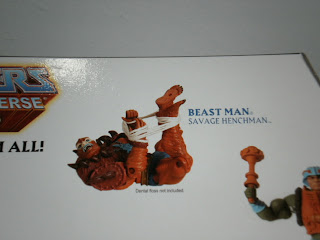 The back has two figures in joke poses, and two rather hillarious bios for Mo-Larr and Skeletor.  I think that Mo-Larr picture is from Robot Chicken. This is also the first time Grizzlor is shown on the back of the box, and Mattel had to do a cover-up for him when the box pictures was first released.  Grizzlor won't be released until later in the year. 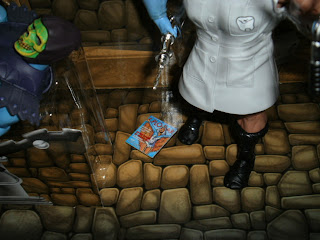 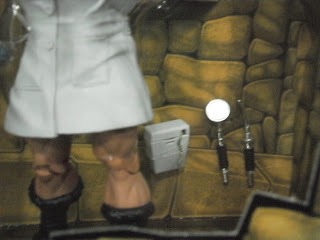 The floor of the box also has a magazine with Sorceress on its cover printed into the design.  Mo-Larr's other accessories are also tied by rubber bands on the floor of the box, and that's a little bit unimaginative considering the rest of the box.  The least they could have done was to illustrate a shelf or a tray and to put those on the shelf or tray. 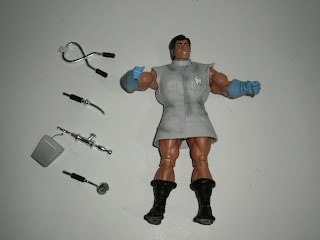 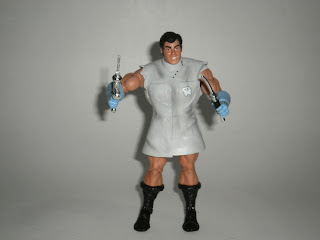 I'll be honest, I didn't free Skeletor from the box (but did remove his head).  So this review is mostly about Mo-Larr.  Mo-Larr comes with 5 accessories of which 4 he can hold, the drill and extractor in his right hand and the mirror and pick in his left.  He can't hold the dental floss.  The four accessories which he can hold are finished in a vac-metal silver, which is a nice touch.  There's a lot of details there, including an oversized tooth in the extractor.  Sadly, the tooth is not removable. 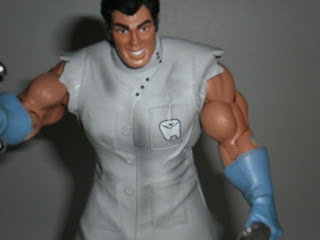 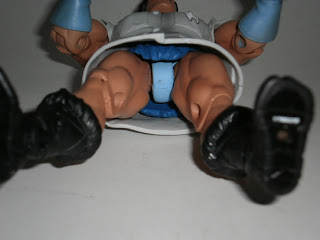 Being MotUC, Mo-Larr comes on the standard body, including the furry pants, and has only 2 new pieces, his head and the dress/smock/frock thing.  The head is sculpted with a nice grin and resembles somewhat the mien in the Robot Chicken episode, although it has been updated somewhat.  The smock is just made of soft plastic with the details molded on and given a black wash which was probably supposed to make it look more natural, but instead, made the frock seem dirty instead.  The paint is good, and the tampographed tooth on his breast pocket is a bit odd due to the sculpt, as there seems to be a piece of string coming from the pocket. 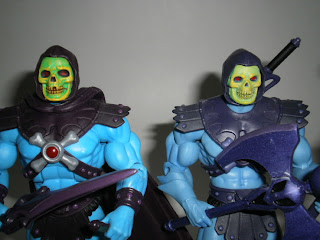 And the Skeletor's head?  Well, it's a lot greener than the vintage head, that's for sure, and the purple does not match the normal purple armour that Skeletor wears, and so the figure looks rather funny in the box because of the two different shades of purple.  The purple _does_ match Keldor's purple armour, which was interesting.  I guess if I wanted another Skeletor, I could always bust open my extra Keldor (and yes, I do have an extra Keldor lying somewhere...) 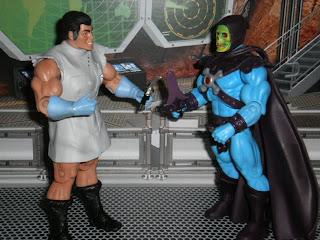 Overall, this isn't a bad pair of figures.  They aren't great though.  Still, I think that if I gave Marzo and Optikk a chance on my display shelf, then I'll have to give Mo-Larr a spot besides them.  And as for the Skeltor's head?  Well, it's back to the body on the chair in the box.
Posted by Novelty at 00:48