Yes I know it's Tuesday, and I started the week off with a Blog Mash Bash over at Is It Fun?  That's because I wanted to end this week with the last figure of this wave.  Welcome to DCUC Wave 12 week here on the final week of Justice League June.

And the first figure today is Eclipso.  Not because he's great or anything, but because Mattel in their infinite wisdom decided to number him as Figure 1 in the wave.  Who is Eclipso?  Some villian, I'm going to guess, I really have no idea.  I've never met him in the comics I've read, and I was a bit apprehensive about getting him because he's such an unknown to me. 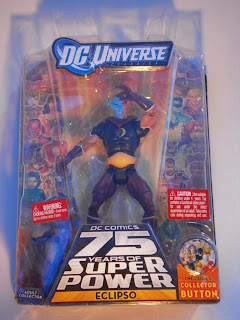 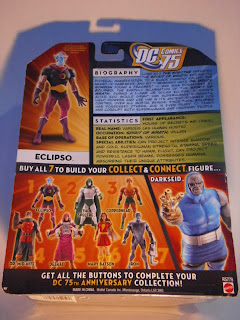 If you can't tell, I got a new lamp from Ikea and was just playing around with it.  Eclipso comes on the new 75th anniversary of DC comics card, which is very different from the previous incarnation of the cards.  Eclipso is posed such that it shows off his left hand with the... whatever it is he's holding... in it.  The card back shows a bigger picture of Eclipso and his bio and stats at the top half.  The bottom half of the back shows all 7 figures in the wave and the Collect and Connect (CnC) figure, Darkseid. 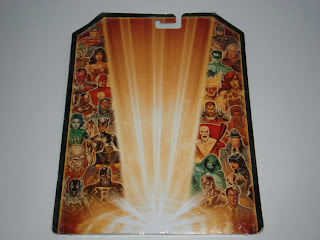 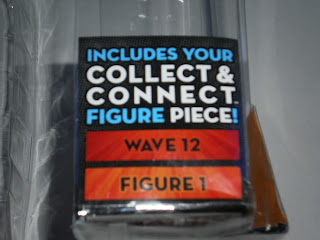 The front of the card trades the comic panels (or layouts as Lemonjuice would probably call them) with something that reminds me of the JLU figure boxes.  However, instead of dynamically flying from a starburst, the characters are just facing the audience here.  Nothing special about it.

One thing I don't like about the new packaging is that it does not show a picture of the CnC piece that is hidden by the title card.  There's text to say it's there, but it does not say which piece nor shows how it looks like.  That's a bit, well, I was going to use lame, but that's not politically correct these days, so lemme just say, that's a bit like Lemonjuice. 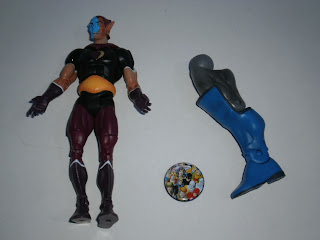 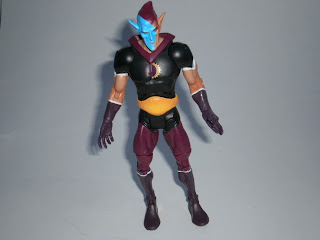 Eclipso comes with a badge which I can do without, and Darkseid's left leg.  There are no other accessories to Eclipso.  Now, Eclipso is based on a slimmer sculpt than the usual muscular jock buck.  Maybe it's because he doesn't wear a jockstrap.  The head and the left hand is definately newly sculpted.  Despite the crazy colours, I like the colour scheme - the mauve (or is that eggplant?) and black goes well together and the white trim brings out the colours.  His blue face is a bit odd in terms of the overall colour scheme, but I guess he's comic accurate.  The logo on his ches is also done well, and is clear and sharp. 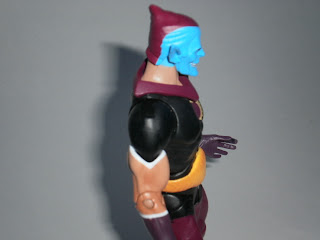 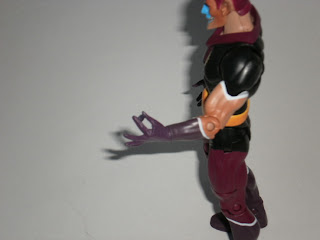 The paintwork is definately imaginative.  There's even a part of his neck that's painted blue such that it matches with the fack.  The white trim is generally painted well, except for that spot on his left arm.  That's the same arm that's holding whatever he's holding.  I don't really like that feature though, as it makes that hand useless for other things like holding weapons or well... most other things. 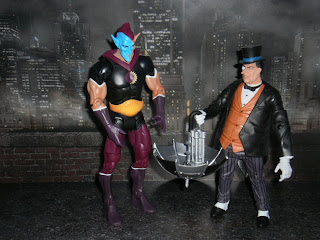 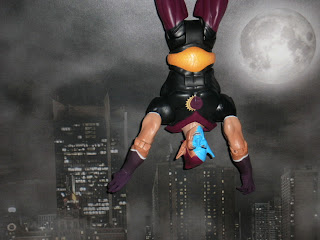 Despite the gory face blue, this figure actually made me smile.  It's one of the few DCUCs I actually played with as I was taking these photos.  I like the mischievious grin on his face, which just makes me want to play with him more - I guess that must be an aftereffect of watching Toy Story 3.  Before I opened him, I would have said he's box-bound, but now that I've actually played with him, I think we've sorta bonded, so he's going on the shelf.
Posted by Novelty at 00:51