There was a gap today since I didn't have the second Maash figure to put up this week.  So I went shopping for something DC related.  I found two DCUC Etrigans from Wave 1 (which I already have) and a DCUC Cyborg (which I don't have, but didn't really want to get).  I did find a gitd Batman Mission Masters 4 figure, and this figure - Crazy Cut-Up "The" Joker. 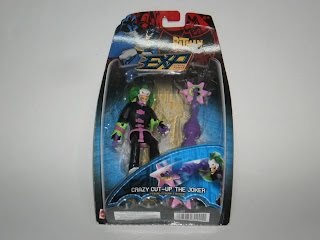 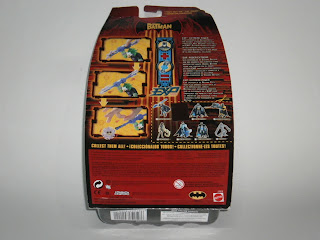 I don't think I have figures from this line... if I do, I don't remember them, nor have I opened anything on this blog in the past year and a half.  This is a Mattel figure so it's a bit more modern than the Batman Kenner stuff.  And it's based on a cartoon series I presume.  The box has the logos on the front top, a nice clear bubble and a colourful title card with a picture of the character.  The packaging is nicely customised for the figure. 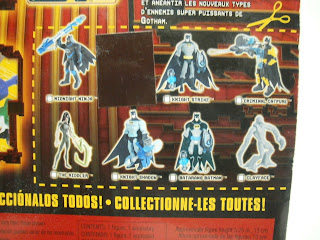 The back of the box is trilingual and therefore is a bit wordy, but it has three pictures to detail the action feature, some bios and the cross sell figures in the line.  It's interesting to note that one of the figures have been "censored" on my card.  I also find it interesting that the Riddler is female in this incarnation of Batman.  Also, there's a whole bunch of logos on the bottom of the card - DC, Cartoon Network, Batman, Mattel.  Wow, could there be any more logos for a single toy? 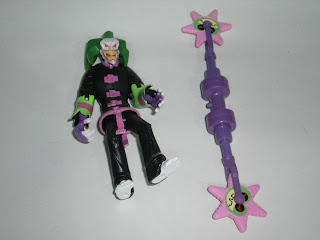 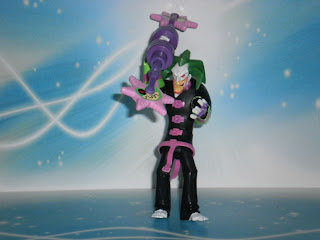 Joker comes with his springloaded lavendar and pink Crazy Cut-Up accessory.  The pink stars actually rotate at the end of the, erm... toy? and can also be removed from the prongs and used as ninja stars.  There is a button on the middle of the accessory - the ends of the rods can be pushed in until they click, and when the button is pressed, the rods extend.  The good thing about the accessory is that it can be held very firmly in the Joker's hand. 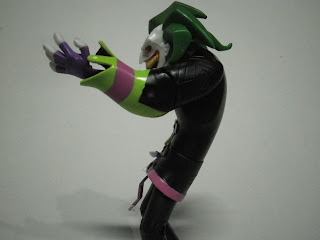 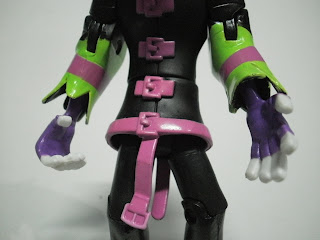 The figure looks great, at least that's my first impression and that's partially why I bought him on impulse.  The sculpt has all the details including belt buckles on his costume that's painted in a garish pink.  Yes pink, as in Barbie and My Little Pony pink.  The pink clashes with the green and the purple on him, but that doesn't really matter.  But on opening hiim though, I realised that his sculpt has him hunched back in a rather weird position.  He has knee articulation, but the scult ensures that they are always bent so that he can stand upright... or as upright as the curved C back that they gave him allows.  Besides the knees he's also articulated at the hips, shoulders, elbows, head and waist, but his wrists are not articulated despite it being a separate piece.  That really sucks big time because it means that he can't hold his accessory in different positions, e.g. across his chest. 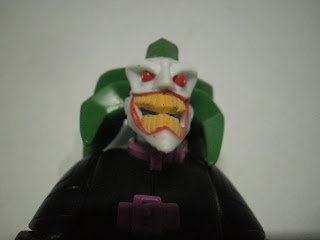 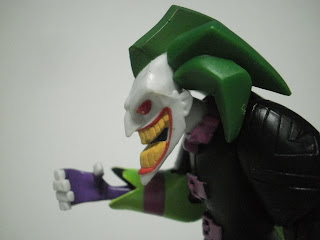 The head sculpt seems a bit uneven, or is that due to the painting?  The hair pieces seems to be separate pieces glued on to the figure and it does hinder the neck articulation somewhat, but not a lot. 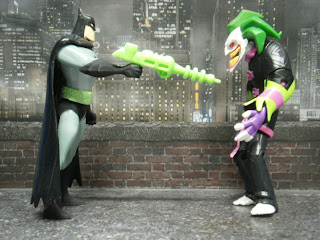 I have to say, after playing around with him for a bit, I feel that he isnt' that great a figure.  Sure he looks great and all from the front, and he's great to play with but he's prone to fall over when displayed thanks to his weird sculpt.  So I guess it's back ot the box for him.
Posted by Novelty at 01:12