Some history about Ben 10 - it debut on Cartoon Network and ran for 4 seasons before upgrading itself to Ben 10: Alien Force.  That ran for 3 seasons.  Last year, it rebranded itself  as Ben 10: Ultimate Alien and the season has just finished last Sunday.  So there's been a total of 8 seasons, and about 4 movies.  Toywise, the main line has 4 waves, but of course, there's more to it than that.


This is my Ben 10 list though, and I know I've been wowed by a number of figures out there.   But to be fair, I can only really rank them based on what I actually have... and that means what I have opened this year. 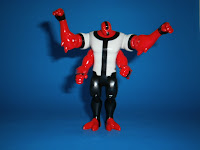 10. Fourarms
Fourarms makes it to my top 10 list thanks in part to him being Ben's favourite.  He's not really my favourite, but since I'm the nostalgic kind of guy, I chose him because I prefer this design with the white and black shirt over the "naked" design that Ben sports in Alien Force and Ultimate Alien.  This figure also has two extra points of articulation for the two extra arms, a bonus for the line. 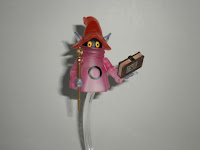 9. Orko
Orko is an Alien, well, a Trollan, which is sort of an alien.  I'm sure if he was in the Ben 10 univrse, he'd be part of the omnitrix/ultimatrix.  Besides, he was my top MotUC for the year, he's got to be sneaked into the other lists as well.  Who else would I sneak into this list?  Read on to find out!
Orko would make a good character for a crossover with Ben 10 though.  But alas, that's never gonna happen. 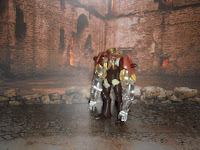 8. Vilgax
The first bad guy on the list.  He was the unbeatable alien who Ben beats again and again, usually with lots of help from his "Scooby gang".  This version of Vilgax that I picked is the one with the transparent parts.  I like how the transparent arms gave him a look that's different from most other figures, and in fact toys, that are out there.  He's sort of like those Crystar toys from yore (or the 80s). 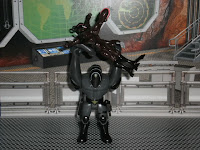 7. Tetrax
It was a tough choice between Tetrax and Diamondhead, but I chose Tetrax because of his better design.  He has a removable helmet and is a lot more bulky than Diamondhead.  Granted, he does not have the crystals that Diamondhead has, but that's no biggie as he can convieniently "borrow" one from Diamondhead.  Diamondhead, though, can't really borrow Tetrax's bodysuit.  This bounty hunter toy is fun, as the picture shows! 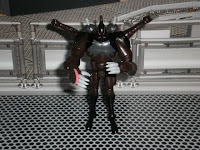 6. Six Six
How can I not choose Six Six for the 6th spot?  Six Six definitely does not suck.  Thanks to his detachable weapons and his extra appendages (which are also detachable), Six Six is one of those Ben 10 figures that went above and beyond what a Ben 10 figure is supposed to be.  What he has going against him are the stick like legs, but hey, that's only because the cartoon design was done that way.  So, so he's a bad guy bounty hunter, and yes he does have some fame as he shows up as a recurring character in the cartoons and he gets a place on my list! 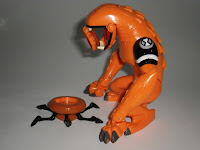 5. Wildmutt
That's the name that I hear people call Lemonjuice McGee, particularly when he's passed out on the pavement in a pool of his own bodily fluids.  But no, Wildmutt is another one of Ben's aliens and he is blind and without eyes.  Instead, he depends on his other senses to perceive his surroundings.  The version I opened this year is one of those bigger than usual 8" figures and this one comes with an action feature and a tub of slime to represent his saliva.  Thanks to the saliva/slime he climbs up to place fifth ont he list. 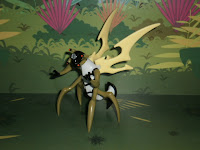 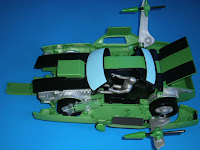 3. Action Cruiser
And the second runners up is taken up by this huge vehicle.  It rolls like a vehicle, but just look at the picture, it transforms into a jet of sorts.  And it even has an action feature - spring propelled balls which loads in the trunk and shoots out from the front.  In addition, there's a Kevin figure included with the vehicle and two tiny aliens in clear plastic globes.  The vehicle is smartly designed and like Vilgax harkens back to an 80s line, this time the MASK toyline. 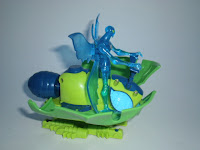 2. Big Chill
OK, so I cheated as the version of Big Chill that I opened this year is the transparent one (bonus points of course for being transparent), but he also comes packed with a beast, which again transforms.  Based on those points alone, it trumps the Action Cruiser.  Now the beast's action feature isn't as cool as the Action Cruiser - it only spits water, and not very spectacularly at that.  The design of the beast also seems a bit too blocky.  Add that to the fact that the beast has never appeared in the cartoons and well, this seems more like Bandai's attempt to sell more toys (including a cheap repaint of Big Chill) than anything else, but hey, I bought it and I like it and that's why it's in the runner's up spot.

And for my favourite Ben 10 toy that I opened this year?  It wasn't even difficult to pick this one out.  No, it's not Orko again! 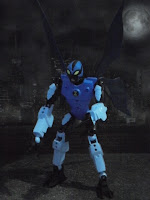 1. Lego Big Chill
Yes, this is a construction toy and yes, this is the only Lego Ben 10 toy on the list (Jetray was cut out at number 11).  Despite using the usual pieces, Lego included two rubbery wings for this model and it transformed the overall look of the toy from a generic Lego Bionicle clone to this foot tall creature of the night.  And it is a creature of the night because its eyes and the Onmitrix logo glows in the dark.  Yes, gitd for the win!  Despite the size, and thanks to it being mostly hollow (it's Lego after all), the figure is light and shouldn't tire anyone out playing with him.  Despite being made from bricks, the joints are very tight and doesn't fall off easily in play, yet rotates easily to give the figure articulation that the other Ben 10 toys can only dream about.  Sadly, the entire range of Ben 10 Lego did badly and Lego has not announced any new Ben 10 stuff for 2011, so this is probably the only wave of Ben 10 Lego toys that we'll ever see.

And that's my list.  Yes, I know there are more awesome figures out there, including the transparent Diamondhead or the light and sound 8" Chromastone, but I don't have those.  If you do have any Ben 10 stuff and you think that it's better than what I have on the list, why not recommend that I get them by commenting below!  I hope you enjoyed this list as I enjoyed writing it.  Now, back to your regular Cartoon Network (rerun) programming.
Posted by Novelty at 20:04