It's another day, and just in case anyone is wondering, the run of Lego stuff is because everything that you've seen so far is from the same box as the Advent Calendar.  Since I had that pulled out, I thought I might as well clean everything good, and by clean, I mean open all these babies up.  So without further ado, here's one half of a Toys R Us exclusive. 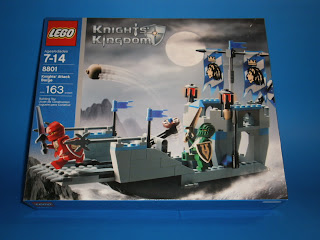 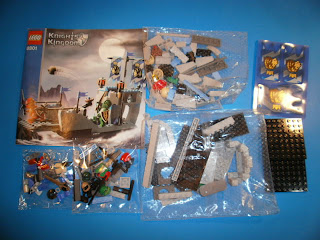 The box was shrinkwrapped together with it's mate.  And I've gotta stop watching lie to me else I'd talk like that scallywag Tim Roth.  So, it's the typical Lego box, huge big picture in the front, alternate models on the back, nothing special there, right?  Well, except that this is a two-set deal and the picture, when placed together with it's mate (there's that word again) shows the knights rushing foward to conquer... ah, but that'd be telling... you'll have to wait for tomorrow for that. 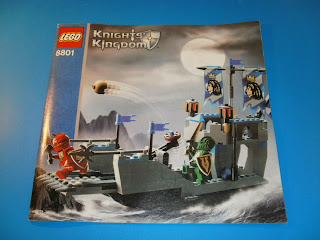 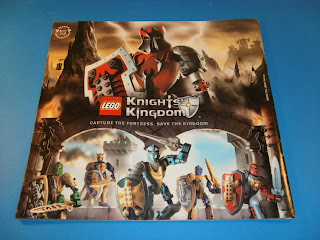 That's not the box above, it's the instruction manual, and not surprisingly, it looks like the box.  The back though has a posterlike quality to it, with all the Knights Kingdom knights beneah an arch and the bad guy looming over them above the logo.  There's even a web address printed there.  Whaddayaknow! 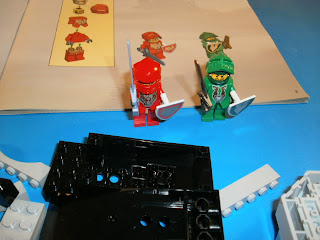 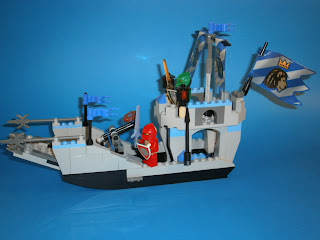 The build was easy, but a bit tedious.  The final model looks good, despite being very blocky.  The addition of the plastic flags and the armed to the teeth weaponary (mostly spears) lends a rather sophisticated appearance to an otherwise boring model. 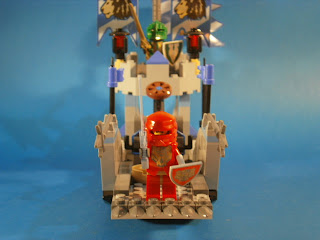 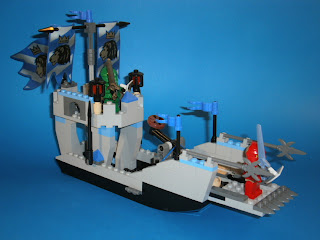 There's even an action feature - the front of the boat drops down to form a raiding platform of sorts.  They've added a jagged edge to the front of that platform, which is another interesting enhancement to the model.  The other action feature is the rubberband powered catapult, which flings what looks like pies.  Hmm... I guess this model could do with more work.
Posted by Novelty at 00:17