#337 of 356 Masters of the Universe Classics Roboto

It took me about a month to get this opened, but that's only because he didn't really fit into the Nostalgia November theme.  Yes, I know Roboto may be nostalgia for some people out there, but since I never had this toy as a kid, there's no nostalgia here for me, well, not much anyways.  Also since this isn't an 80s or a 90s toy, I felt it didn't really fit into the theme for November.  But it's no longer November and I get to open this before the year is out! 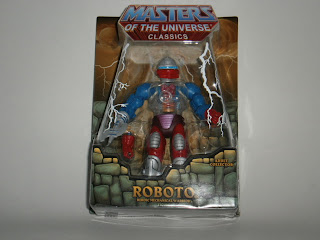 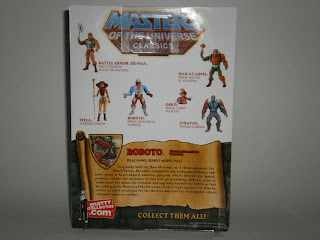 Roboto comes on the standard card, so there's nothing to write about there... or is there?  He's displayed so that his chest with the gears and the heart is prominently displayed.  His axe is shown, but the other 3 arm attachment are hidden behind the title card, which is a pity.   The back of the card shows Orko and because of his size, it looks rather blank there... 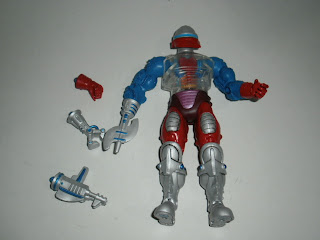 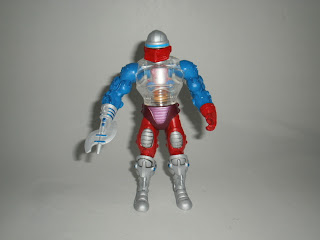 OK, so Roboto doesn't have as much accessories as Grizzlor, but he does come with a transparent chest like his vintage version, and like his vintage version, the gears rotate when his waist is twisted.  Because of the action feature, he loses his ab crunch articulation, but gains an extra point of articulation on the jaw so it all balances out.  The colours are vibrant, although the choice of the metallic purple on his groin seems a bit odd as the vintage figure did not have this.  The paintwork is acceptable.  The three arm attachment are actually made from a rather soft plastic, so it's a bit bendy.  There's a bit of blue paint on these arm attachment, which updates them nicely.  The removable hand though is made from hard plastic. 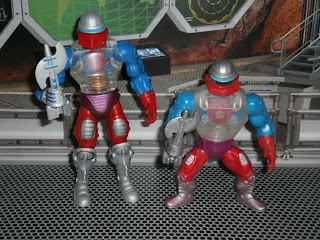 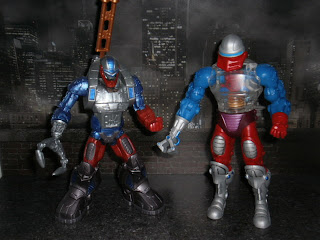 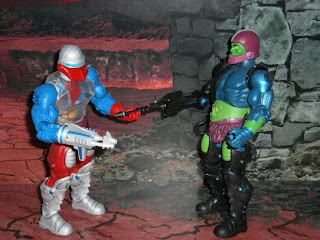 Overall, despite this being an excellent figure, he's also rather bland.  Yes, the gears in his chest turn, and his arms can be replaced like Trap Jaw, but there's something missing about this Roboto that I can't put my finger on.
Posted by Novelty at 00:31