It's Mattel Week, and although this may seem to be Mattel, it's actually a Spy Monkey Creations custom.  But if only life was this easy.  Although this is meant for Mattel's MotUC line, and made by SMC, it's actually sold by Poe as an exclusive from his store. 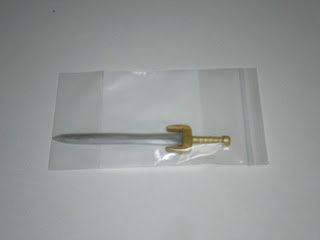 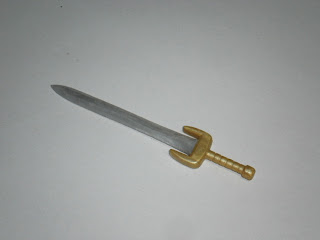 My sword came in a padded envelope that was made without plastic.  Points there for being eco-friendly.  Inside, there's a zip lock bag with the sword.  The sword is just a two piece affair, with minimum sculpting detail.  My copy had rather "lumpy" colours, as if the plastic wasn't mixed properly.  Still, that is a minor detail and isn't too noticable. 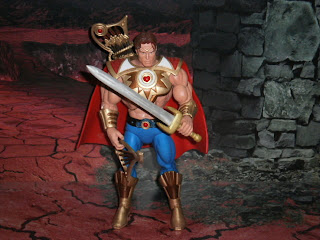 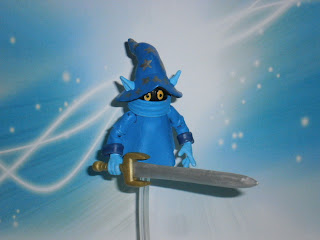 The sword is a bit cartoony and actually does look good on a cartoony character as Bow.  It looks even better on my custom Gorpo though, which is who will be wielding the sword in my display!

The sword was also a prize for the contest.of the ages.  Mountain-man (ckallies) had the most number of 'tickets' in the raffle at 36 followed by Taz with 12 and hockstylin with 11.  There was a total of 100 (exactly!) 'tickets' in the raffle.  The last contest I ran, the person with the most tickets didn't win the prize and as I was doing the draw, that was my thought that the winner probably won't be Mountain-man.  And I was correct.  The ticket pulled out of the "hat" bore the name of a Warner Bros character.  Congratulations PapaTaz, for winning the Sword of Ages.  I hope you've got your sword!

However, since I had a spare copy of the sword reserved, I decided that I'm gonna give it out as a prize for effort... and effort definitely goes to Mountain-man for trying to win the sword.  So congrats Mountain-man!

I'll probably start the next contest at around July-ish.  Watch this space!
Posted by Novelty at 23:49