Welcome to Attack of the "killin teh line" clones week. Today we have Battle Glove MAA. At first look, BG MAA may be an alternate, but on closer inspection, he's just the old MAA repacked with a few extra accessories! 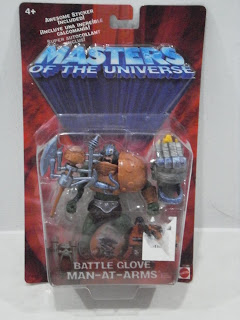 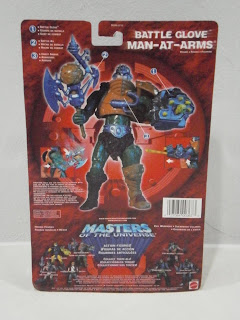 BG MAA is on the normal red card. If you've been regularly reading these, you'll know I like the red card and prefer it over the green card. BG MAA was also in the penultimate wave of figures, with the likes of such as Sy-Klone and Prince Adam. 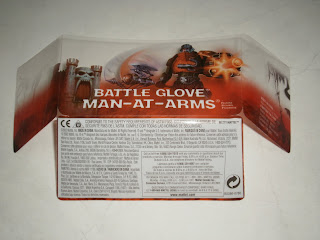 The title card is nicely illustrated - there's Castle Grayskull, as usual, and MAA showing off his BG and his axe on a club. I like the perspective that the image is drawn with - pointing the missile towards the viewer seems rather inspired. 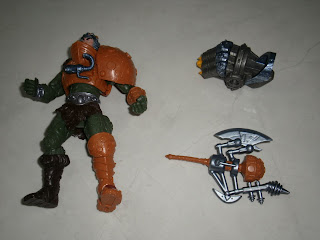 This MAA comes with his club, but this club is not his normal club. Instead it's modified with an axe grafted on to it. Then there's also the raison d'etat (or however that's spelt in French) for this figure, his Battle Glove. I must say, the glove is nice in that it fits into the fist rather well. There's also a firing missile built into the glove which is ingenious. What I don't like is that fact that like Mega Punch He-Man, there's no hole in the glove (or his left hand) for holding the club/axe, nor is there a slot to hang it on his back. That seems like an oversight to me. 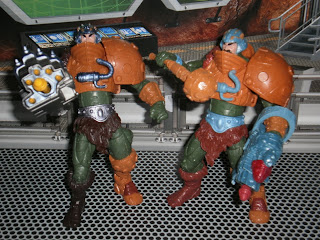 Here are the comparisons. I was surprised to see BG MAA is coloured slightly different from the normal MAA, in that the BG version has darker furry pants, boots and shoulder "fur". The blue details on the original figure has also been replaced with silver on BG. The sculpt is exactly the same though, this is just a repaint with new accessories. 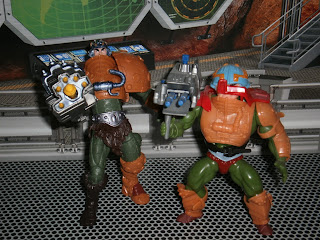 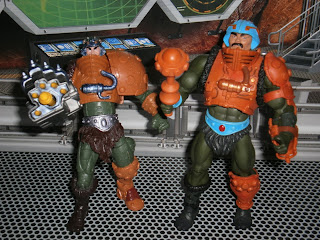 Well, as usual, this MAA looks way too anorexic when compared with the vintage figure (shown here with Megalaser, because every MAA should have a huge big gun too!). The huge shoulder armour just looks like a "breast helmet" of sorts - way too oversized for such an anorexic figure. The shoulder pad also makes the head look tiny by comparison, which is not a nice thing for MAA.

There's almost no point comparing MAA with his Classics counterpart. The Classics figure is just excellent in terms of proportion, size and accessories provided. It doesn't have a big gun, but well, that's not the defining point of the character.

This MAA is just going back into the box, but I do have more pictures on Facebookif I need to refer to him. Seriously though, the Millennium line seems like such losers, especially this week with the "killin teh lien" figures.
Posted by Novelty at 18:13