Welcome to the start of the "killin teh line" alternate variants week. This week, I'd be focusing on opening either repaints of existing figures or alternate mode figures of the Millennium line, figures which, according to most, caused the extinction of the line. 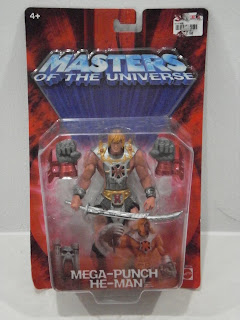 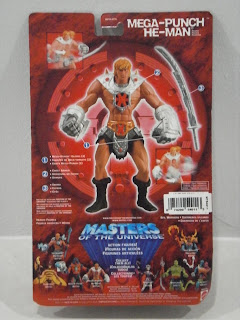 It's always good to start with He-Man, and this was one of the bazillion or so He-Mans in the Millennium line. Mega Punch He-Man was in one of the last waves of the red carded figures, together with notables such as Man-E-Faces, Buzz-Off and Whiplash. 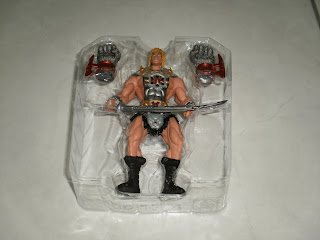 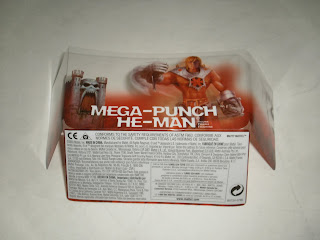 The tray is interesting in the fact that the sword does not have its own slot, but is displayed across He-Man's belt. The red title card is nicely done as usual, although the illustration of He-man on it seems rather wooden. 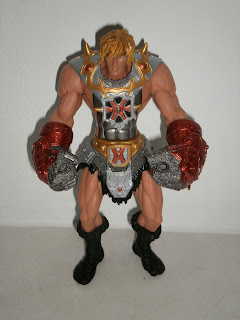 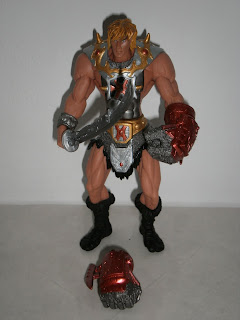 This He-Man comes with two boxing gloves, which fit over his fists rather smugly, which is good. What I would have preferred would have been either holes in the gloves such that He-Man could hold the included sword, or a harness at the back of the armor for the sword. I'm not sure the armor is that great either - it reminds me strongly of Beastman for some reason. 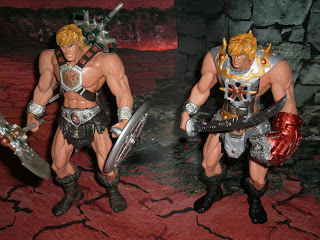 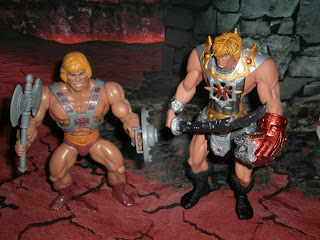 Comparison time! Despite sharing the same sculpt as Millennium He-Man, this He-Man seems a lot more hunchback, thanks to his Beastman inspired armour. I'm not a huge fan of the armour. When compared with the classic figure though, this He-Man seems to be a totally different figure, what with the Millinnium french fries as hair, and the Scottish-inspired sporran. And the hunchback doesn't give him any points either. Blech!

This isn't a favourable figure, and I'm glad to have been opening him so that he'd take less space outside the bubble. I'm not even going to bother putting him on display. More pictures, as usual, are in my Facebook album. Oh and I just want to shout-out to Wes Grogan for adding this blog to his bloglist!
Posted by Novelty at 17:16