Well, it was Stratos yesterday, so here's a "killin teh lien" Beastman to go along with that Stratos. Welcome to Attack of the "killin teh lien" clones week. There are many different types of "killin teh lien" figures - we've met the alternates like Mega Punch He-Man and Fire Armor Skeletor, re-issues with extra parts like Sky Strike Stratos, and now today, the third type, repaints! 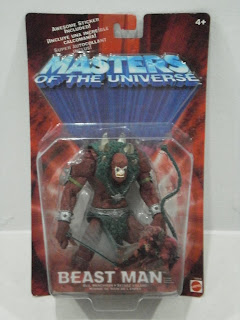 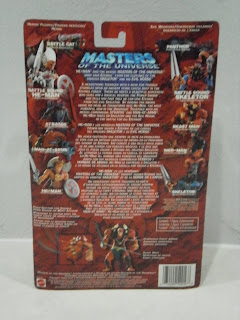 Beastman was the first series of Evil warriors, and his red card is exactly the same as the card that came with that Beastman. Notice the cardback has a lot of text and the cross sell figures are shown at the sides instead of at the bottom. Notice also the small beastman at the bottom. I'm glad they changed all this for the latter series. 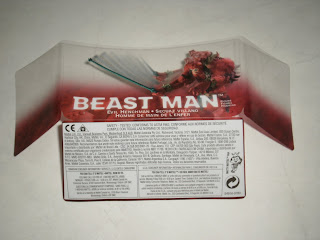 One thing that didn't change is the title card inside the bubble. Well, the transparent fading to red thing was one of the few thing that was constant on the card, as well as the "animated" figure. And in this case, the whip wielding Beastman does seem to have his action feature defined. What's not present is Snake Mountain, which would appear on the title cards of future waves of Evil warriors, but that's a minor point. 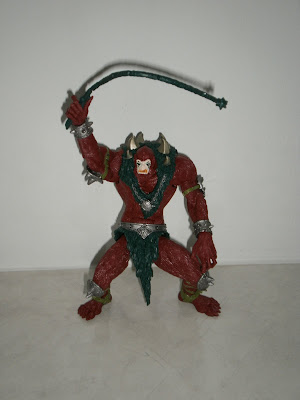 Beastman comes with his whip, and his armor. He's basically hunchback and has a button on hsi back which causes his arm to move and thus the whip to go back and forth. He still has the fixed pose that was the problem with the entire line, and the action feature actually spoilt the arms from posing. 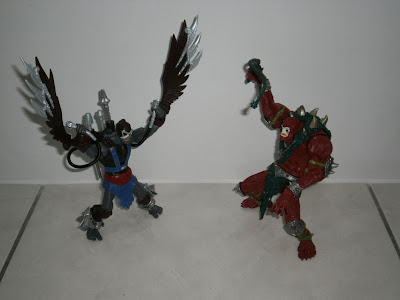 Having said all that, Beastman is huge and solid, and has no problems actually standing up unassisted. Beastman is almost as wide as Stratos with his wings outstretched! 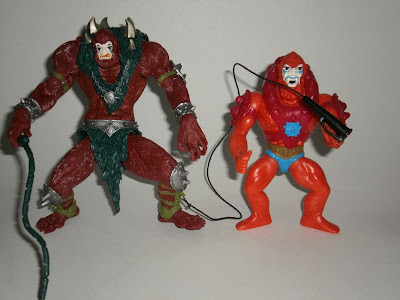 Comparison time. This Beastman seems a lot more Beast than man when compared with the vintage figure. It's also almost twice as wide and just a bit taller than the vintage figure. The colours are a lot more subdue, but equally garish, orange and the various shades of green just doesn't go together and neither does orange, red and blue. 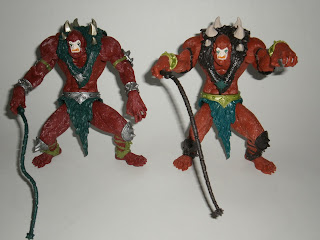 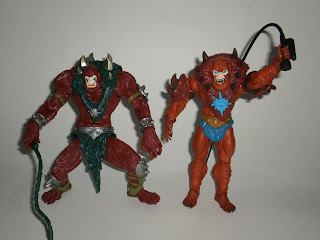 When placed next to the original Millennium Beastman, the alternate colours are very obvious. The repaint has a darker shade of orange, with a green whip instead of a brown whip and silver highlights instead of dark brown. The brown leg guards have morphed into the light green and silver. The ivory coloured horns on Beastman's armor is now more ghastly in metallic silver. The overall result is that the Beastman looks even worse.

Repaints are horrible. I have no idea why I got this Beastman. Maybe it was cheap. But I could always have spent the money on better figures...
Posted by Novelty at 19:37