The Millennium MotU line was plagued with multitutes of the Attack of the "killin teh lien" clones. It started as early as Jungle Attack He-Man close to the beginning of the line and continued on even to the green cards. Welcome to day 3 of me opening something from Attack of the "killin teh lien" clones. Today, it's Stratos, or to be more precise, Sky Strike Stratos. 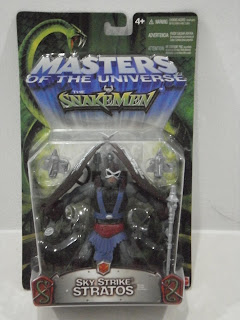 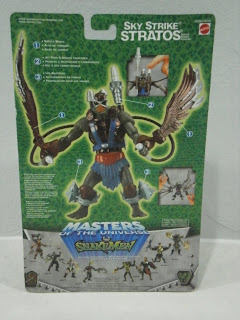 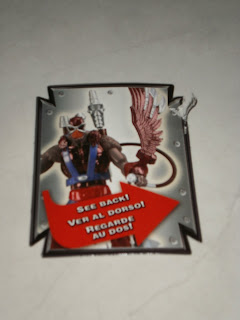 I have to say I'm still rather disappointed with the loss of the nice plastic title card from the red cards; the replacement is the rather bland cardboard title card and this "See back" card on the side, both of which are rather uninspiring. Oh well. 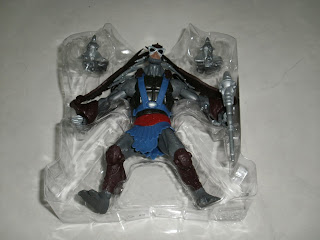 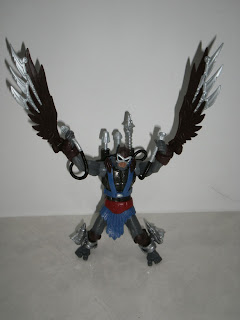 The Stratos is a straight repaint, but it is packaged with a number of accessories, well, two to be precise. These rocket missiles are attached to Stratos' legs and seems out of place on him. It also makes Stratos seems rather Ace McCloud-ish (from Centurions fame). 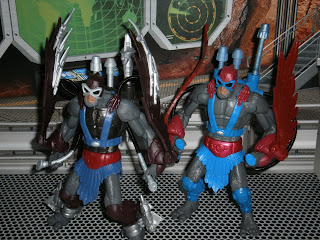 The repaint is especially clear when placed next to the original Stratos from the Millennium line. The darker colours seems a bit unnecessary, but I do like the silver tipped wings. The firing missile is also different. The addition of the leg missiles seems like an overkill to me. 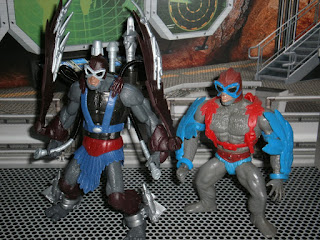 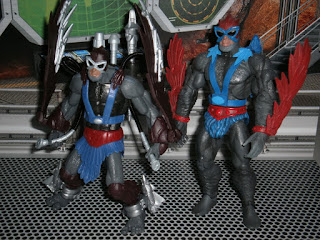 When placed next to the vintage or the Classic versions of stratos, well, the Millennium Stratos feels a little bit awkward. It's like placing a pterodactyl next to an eagle. Somehow, despite getting an "update", I feel that the Millennium Stratos looks and feels older and more out of touch, than either the vintage Stratos which predates it, or the Classics Stratos, which was made after it. The darker colours also makes this Stratos less attractive than the brightly coloured versions.

Overall, this Stratos is going straight back into the box. he's definately not going to be displayed. Which means the one of the few places that I can see more of him would be in my facebook album.
Posted by Novelty at 18:29