We are almost at the end of Attack of the "killin teh lien" clones week. The pattern so far this week has me alternating heroic and evil warriors, and today I'm not going to make an exception. 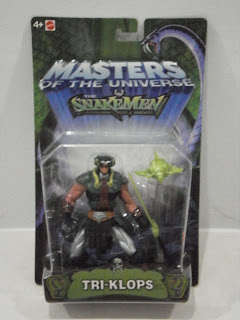 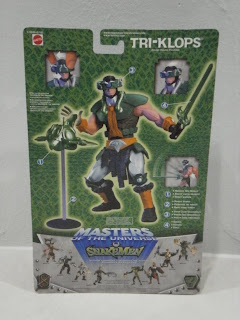 This Tri-Klops is a repaint of the original Tri-Klops, and he has a green card instead of the red card. This is not going to go well in my book since I'm biased against the green card. However, and yes, this is a however, the repainted Tri-Klops actually looks rather good on the green card as opposed to the red card, and I actually like the cardback for a change. Wow, will wonders never cease... 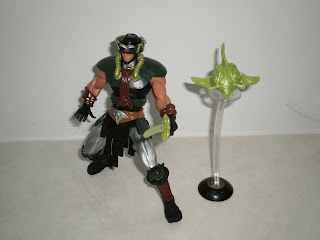 Trike comes with his doomseeker, repainted green in this case, but otherwise still the same as the first release of the item that originated from the Millennium series - one of the few rare things that has no vintage counterpart (in toy form). Tri-Klops also has a repainted sword, and since he's a repaint, he suffers from the ugly fixed pose of the original toy. I'm not a fan, and I'm definately not amused. 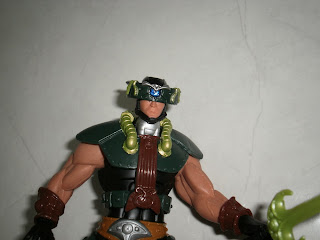 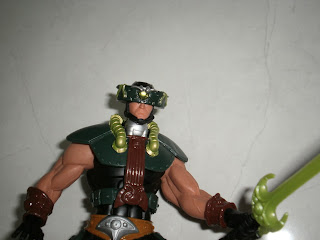 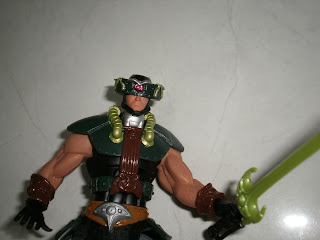 One of the few things I like about the Millennium Trike are the transparent coloured jewels that form his 3 eyes on his visor - red, green and blue. That's still present here, although they are a bit hard to see. In a toyline where it's anime influenced, I can't believe that they made his eyes so small. Here, he would have benefitted from bigger eyes as it shows off his main feature. Oh well, opportunity lost! 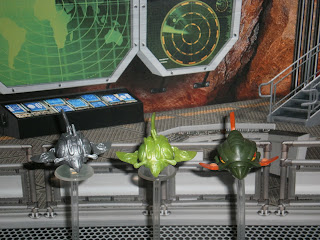 I actually like the green doomseeker. Yes, the colour is a bit sickly, but somehow it still works when compared with the silver version on the left and the Classics version on the right. Obviously the Classics version has got a lot more paint detail and is a different mould and looks a lot better than either of the Millennium versions, but those versions aren't that far behind the Classics doomseeker. One point to note is that the stands all look identical to me, all 3 of them! 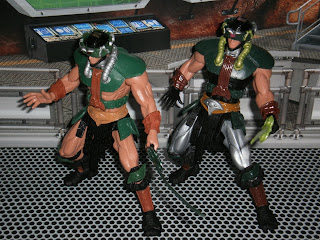 Here are the comparisons! The repaint received silver pants and a black shirt under his armour in addition to black goves. The brown on the repaint is darker, and some of the silver detail on the original as well as the green sword has been replaced with the same sickly green as the doomseeker. I have no idea which one I dislike more when placed side by side. Both of them looks horrible with that fixed pose. 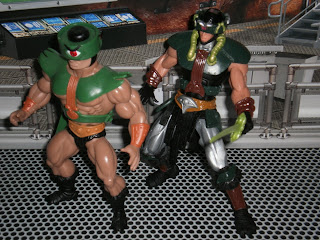 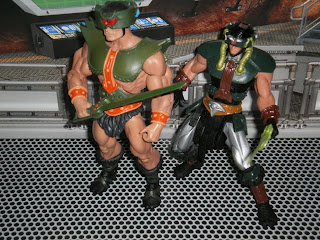 When placed next to the vintage and the Classics figure though, the Millennium Trike looks almost like a different figure. Surprisingly, Trike is not as anorexic as he could have been, thanks to the shoulder pads and the leather "skirt". Still, changing out the furry pants for the leather skirt-thing is a negative in my book. Oh well, killin teh lien indeed!
Posted by Novelty at 19:16