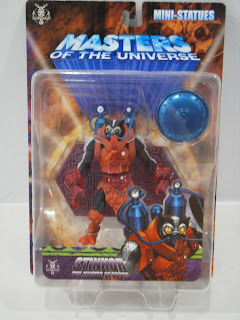 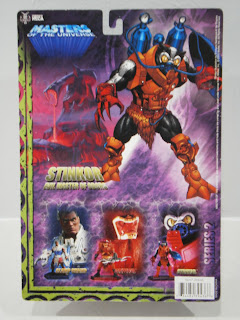 Stinkor is series 2 of NECA's Staction, or Action Statues (which, I guess is an oxymoron). Which probably means that he was in the next wave of the Millennium toys before the toys were cancelled. Boo.

He comes on a nice Evil Warriors card, with Snake Mountain on the back, a nice drawing of the toy and the three figures in the Series at the bottom of the back. Usually the action feature will be displayed here, but since this is a statue and that there are no action features, the back of the card is not too cluttered with the action feature. 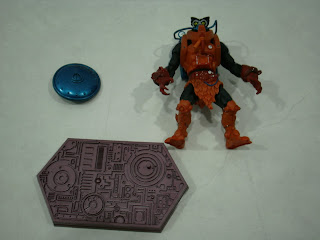 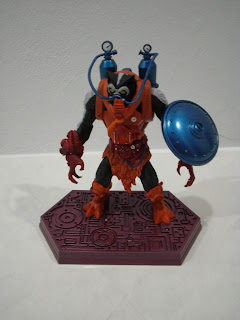 He's sculpted in the Millennium style and reflects how he looks in the cartoon. There's quite a lot of detail on the sculpt, as befits the four horsemen. I do like the detail on the furry loincloth. The paintwork is excellent, with the skunk's black/white painted spot on (pun not intended). One disappointment though is that he does not smell (or stink as the case may be) of patchouli.

Stinkor comes with the Evil warrior base, and his blue shield, which has a peg instead of a handle. The shield plugs into a hole in Stinkor's forearms, and unlike the vintage figure, cannot be held in the hand. That's a minor detail though for this statue. 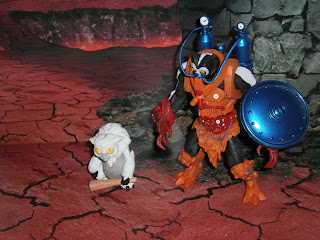 Despite the lack of articulation, this is a rather nice figure. Of course, I'm biased, as Stinkor will always have a special place in my MotU-verse. 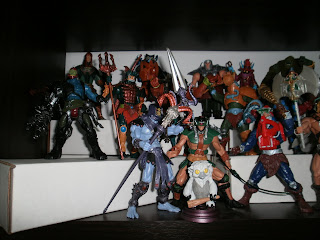 Here is Stinkor with the rest of the Millennium line. Notice how well he fits in with the rest of the line. As usual, more pictures can be found in my Facebook Album for Stinkor. And here's hoping this facebook importing thing from blogspot thing works!
Posted by Novelty at 21:40