We are at mid-week and so far it's been a great Snakemen week, with Sssqueeze, Snake Face and The General/Rattlor being opened this week. I've like two out of the three so far, and find the third acceptable. As I turn to today's figure, will I continue the trend to like the figure for today, or will he go down in flames? 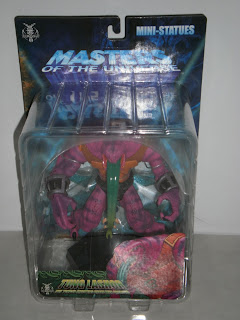 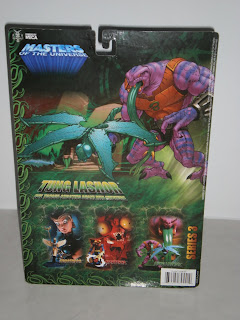 Tung Lashor is Rattlor's partner in crime, being released originally (in the vintage line) together and showing up in the Filmation cartoons mostly together. However, Tung Lashor did NOT join Rattlor this time around - he was a bit too late to be released into the Millennium line and was instead released as a staction in series 3 with Mantenna and the Sorceress.

The box is typical of a Series 3 box, modified with the snakemen motif, of course. The cardback supposedly has the throne in Snake Mountain, but that's covered up with Tung Lashor's illustration, which is huge on his cardback. I like that. The focus on the dragonfly is a bit weird, but nevertheless, it does work. 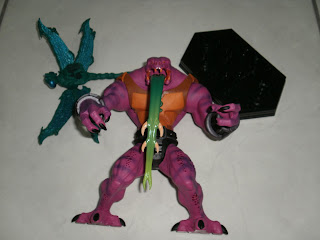 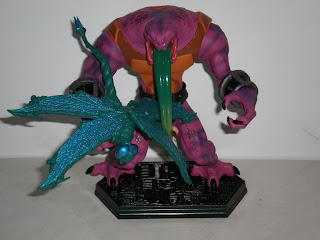 Tung Lashor comes with his stand and the dragonfly accessory. Being a staction though, he has no action features or articulation and at one point I had to stop myself from checking the pose. The weird thing is that there's no way to retract his tongue, which hangs almost to the floor. The figure itself is nice, and huge. The paintjob is nicely done as well. 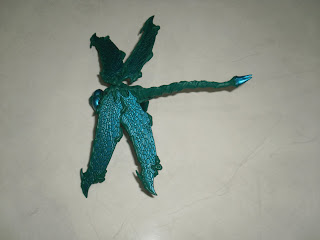 The dragonfly is the focus of the figure, perhaps to take away the focus from the huge tongue hanging out of the unmovable staction. This dragonfly is choc-a-brick with detail, and although it's does not seem to be painted on first glance, it does have a metallic sheen to the wings. It also huge. 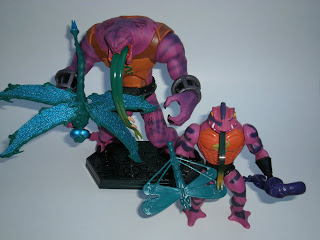 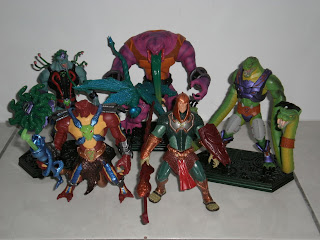 And there's the core of the Millennium Snakemen. Tung Lashor easily stands heads and shoulders over every other Snakemen, including Sssqueeze, which is also huge thanks to his arms. King Hiss, by comparison, looks like an anorexic skinny teen next to Tung Lashor! And yes, if you haven't already figured out, I do like this version of Tung Lashor!
Posted by Novelty at 18:37