It's Day 2 of Snakemen Week of Anniversary April/MotU May. Yesterday, we had Sssqueeze, today we get his compadre, Snake Face. 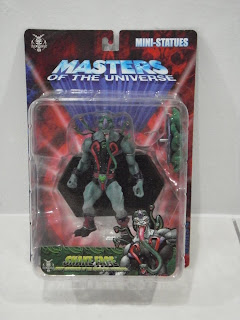 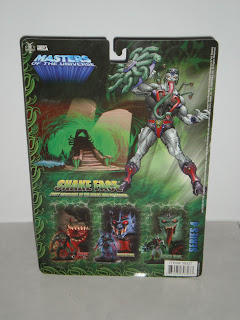 Snake Face is in Series 4, together with Webstor and Leech. His card has the snake border motif, in a similar vein to Sssqueeze and the cardback features the throne from Snake Mountain (or at least that's what I think it is). The image on the back doesn't seem to be done as well as Sssqueeze, with part of the image cut out for the hook hanger. Also Snake Face's left leg seems a bit out of alignment - as if he's got a fracture somewhere. 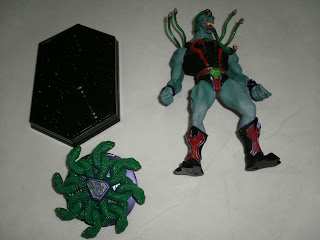 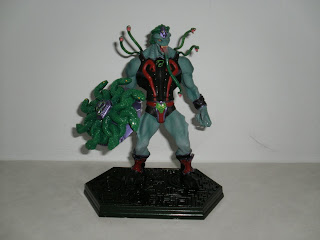 Snake Face comes with his shield and the base. Being a statue, he does not have any action features, or movable joints, which means that the snakes coming out from his shoulder, mouth and torso cannot be retracted. That would have greatly bothered me, but it's done so well on this figure that the only bit that bothered me was the snake from his mouth. Oh, and a snake head over the groin - icky. 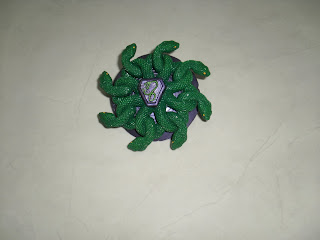 What is impressive though is the shield. Yes, it's geometric, but the size of it and the detail takes it to a whole new level. It's also designed to fit into Snake Face's hand such that it's at a nice angle. It definately draws attention to itself, and away from Snake Face. 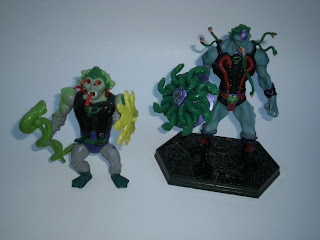 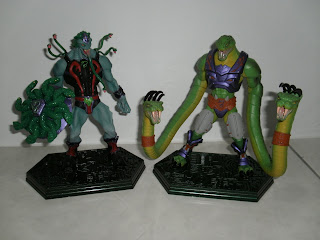 Comparison time! When placed next to the vintage figure, I must say this staction looks more interesting, if only because of the highly detailed shield. The medusa qualities of the figure is toned down in the staction, and the snakes from the chst seems to be missing. However, the boots have had an upgrade and the aforementioned icky snake-headded codpiece is a departure from the vintage figure. The shield is vastly upgraded. What's missing is the snake staff, but that's a minor point.

Overall, this figure isn't as great as Sssqueeze from the same line. It's smaller and not as impressive looking and is even overshadowed by its own shield. Still, I like the image of the pair of them together.
Posted by Novelty at 17:06