I heard some of you are wondering about Keldor's production numbers and here's the deal... The bonus figures have a different set of production numbers compared to the subscription figures. Keldor's numbers are similar to Battle Armor He-Man who hung around for a few days. If Keldor sells out fast, we'll look at a second run just as we would any other sold out hot figure. Hope that helps.

I guess that's a coded message that says "Be Forewarned, Keldor might sell fast because we made less of him, but don't fear, he'll have a second run."

Just who is Keldor? 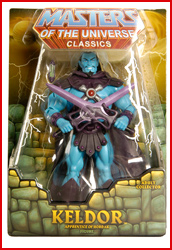 Keldor is Randor's long lost brother, first hinged in the Powers of Grayskull minicomic, The Legend comes alive way back in 1987. He was further developed in the Millennium cartoon series and shown to be Skeletor before he had his face melted off. There was even an action figure of Keldor in the Millennium line. Now, it's finally confirmed on his Classics biothat his mother is a Gar, who is a race of blue-skinned people on Eternia. Will he be popular? Probably among the Millennium fans, but thanks to the minicomic tie in, and to his Skeletor ties, he might be popular enough to warrant a sell-out faster than Battle Armor He-Man. He goes on sale in June on mattycollector.com.
Posted by Novelty at 12:38