I was going to open She-Ra today, but Chris Vint said it should be something appropriate for the day. Well, there's no birthday theme figure in my list ;) Anyways, we selected Orko as a compromise to be the Joke figure of the day. Welcome to Anniversary April! 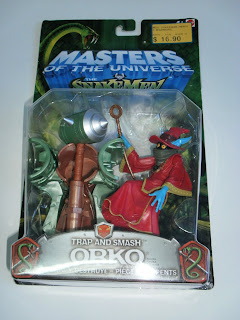 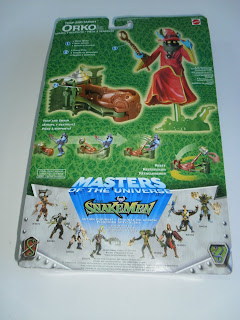 Apparently I bought this figure in TRU for $16.90 (that's to answer Nick's question). I don't really remember buying it - it was ages ago. This is the "variant" Orko and is on the green card. Basically, it's a repaint with a new weapon, or trap in this case. The back of the box looks better to me than Roboto's, but I still think the red backs were much cooler. 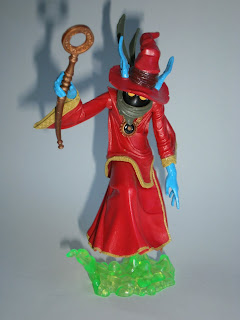 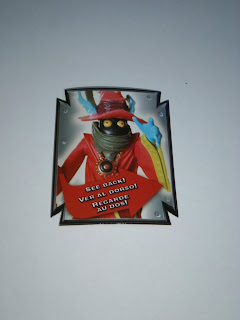 I didn't show the "card" from Roboto, but there is almost like a trading card on the side of the green carded figures, which points to the back. I actually rather like these cards. Orko is packaged nicely, and most of him is visible inside the bubble. The trap seems a bit squashed next to Orko, but that's an accessory so I guess they can de-emphasize it. 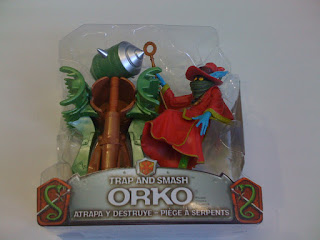 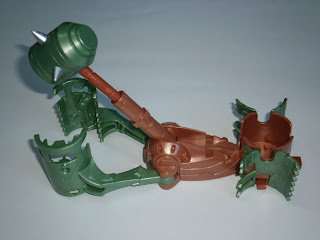 Well, Orko is a boring repaint - he's now orangy red instead of magenta with yellow highlights instead of gold. In fact, the colours looks closer to the cartoon versions (either cartoon) than the first version. Definately a plus. There's nothing much to write about the trap other than the fact that they probably added it to justify Orko's price. 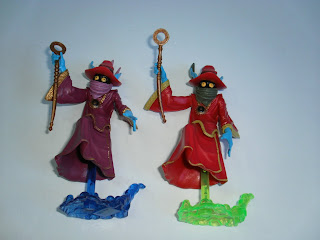 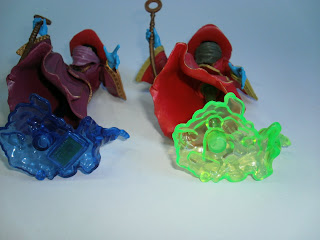 Here are the two Orkos from the Millennium line side by side. The new one has the green base. The green base though, does not come with a chip that the first versions of the original figure came with, so there is probably a small change in the stand. Also, pH6 will probably make some comment about the upskirt view... 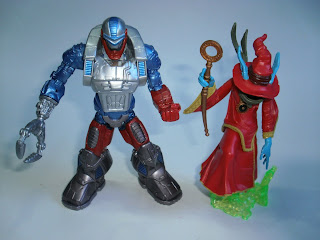 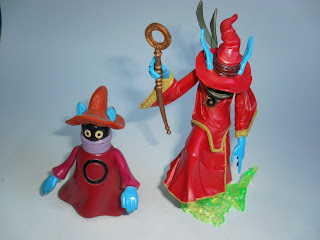 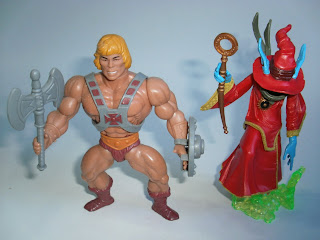 Comparison time. Orko seems to be as big as any Millenium figure - as examplified by Roboto (the only figure I had handy). Scale-wise, he's way too big for his own line. When compared with the vintage line though, the new Orko is almost twice the height. Yowsers! In fact, if the pointy part of his hat is included, the new Orko is taller than vintage He-Man! More pictures, of course is in the Facebook album. Happy April's fool everyone!
Posted by Novelty at 18:28