This is the end of Mecha.nic.al March, and as a preview/link to Anniversary April, here's something that will fit in both - Roboto! I'm looking forward to opening all my Millennium (formerly known by the clunky 200x, thank you Poe for the name) figures, and it's Roboto today, Orko tomorrow, Mossman the day after, or that's the plan. 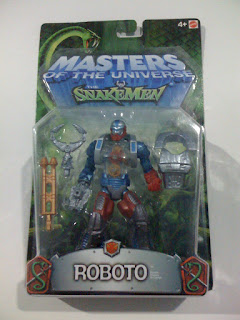 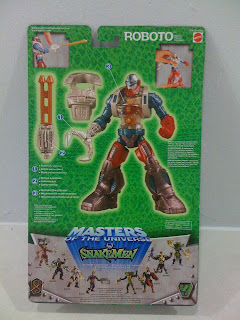 This Roboto is on a MotU vs the Snakemen (aka green) card. I think there's also a version on the normal red card, but I did not get that. I never generally liked the Millennium cardbacks and this is no exception. In fact, I think the green version doesn't look as well designed as the red version, but that's just my opinion. 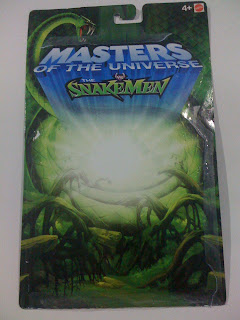 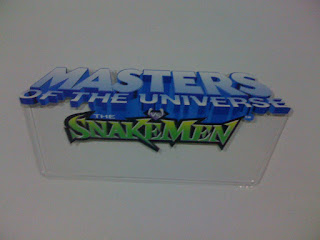 I have to say, I actually like the front of the card. Had this been used only for the Snakemen, it would have been a good move, in my opinion. Oh well. I was smiling when I took out the sticker. I still wonder if the sticker was supposed to be applied to the tray inside, but Mattel decided to just tape it on instead so that buyers will get an extra sticker. I guess I'll have to continue to wonder. 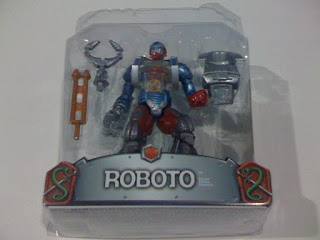 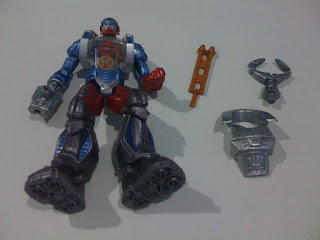 I was a bit disappointed when I opened the figure. Only 2 weapons was the first thought that came to mind. The vintage toy had three - claw, gun, blade. This one only had a missile launcher and the claw. Blegh. 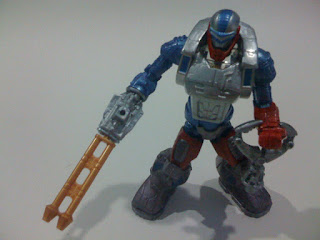 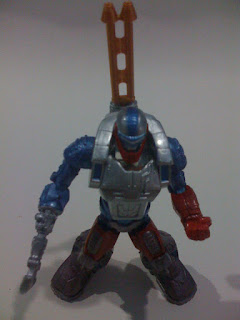 The toy itself is fine, but suffers the usual issues with the line - fixed poses and lack of articulation. I did like the fact that the gears spun and the jaws work when his waist is rotated, that's a throwback to the vintage figure, but the effect is almost completely spoilt with the inclusiion of the chest armor which covers up the action feature. One plus point is that the missile launcher can be attached to Roboto's back, something which I thought was missing in the vintage Roboto - Trap Jaw always had "hooks" to hand his accessories, so why not Rototo? 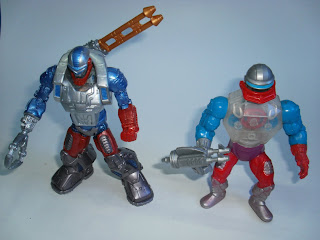 Overall, I think I still prefer the vintage figure better - there's one more accessory for one, and secondly, the action feature (aka the gears in his chest) is not covered up by some unnecessary armour. The vintage figure is also better proportioned (as opposed to the oversized feet on the millennium figure). 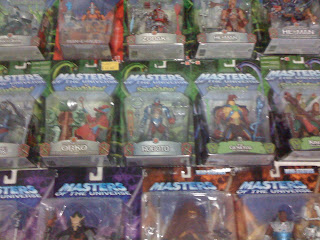 There's more pictures, as always in my Facebook photo album. And so concludes Mecha.nic.al March. I hope everyone is looking forward to Anniversary April. I know I am!
Posted by Novelty at 23:26