Animated August is drawing to a close, but I still have enough stuff for another 2 months!  Eeps!  There's no theme this week, but I really wanted to get these opened and reviewed.  And just because I can, I'm doing a combined opening today so that I can take a break tomorrow. 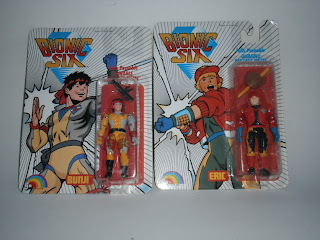 Bionic 6 was, as their name suggests, 6 heroes, each with some form of bionics.  There was a cartoon in the late 80s for these and they toyline is probably based on the cartoon.  Bunji is Asian, and like all things Asian, his bionics enhances his martial arts.  Eric is an all-American kid, and his bionics in his arms enhances his baseball playing skills - pitching and batting. 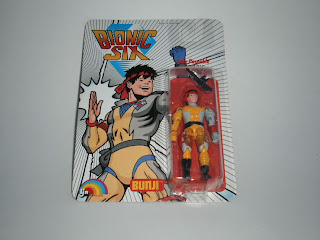 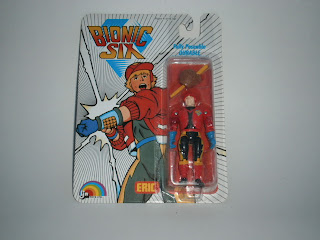 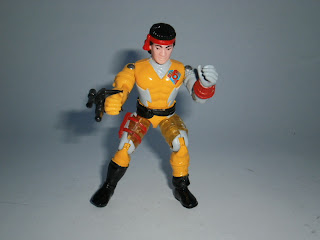 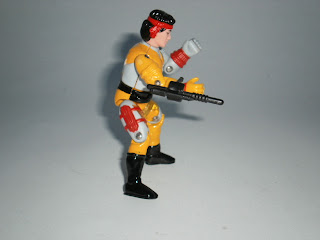 Bunji looks nothing like the illustration on the card.  His head seems to be a lot slimmer and older than the cartoon.  The paint work is adequate on the face and the headband and most of the rest of his body.  The tampographed logo on his chest is nicely done.  His thighs are casted from clear transparent plastic which is a bit weird, but I'm going to guess that's where his bionics are supposed to be located.  In addition, he comes with a gun/baton thing with a sigh that mounts on his wrists.  The accessory is nicely crafted and thanks to the fact that it's mounted instead of held, it stays on rather well. 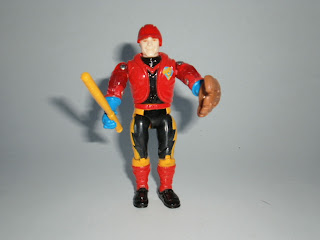 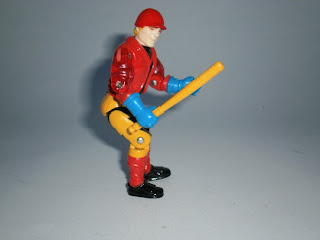 Eric has paler skin than Bunji, and unlike Bunji, actually does bear a passing resemblence to the card illustration.  The paintwork on the figure is a bit sloppy, particularly on the face.  Like Bunji, Eric has 9 points of articulation - two on each limb and the neck.  Eric comes with a baseball bat which is held and a baseball mitt.  The bat was bent out of the bubble, and I'm sure Lemonjuice will have a whale of a time talking about the bent stick. The glove is made from soft plastic and fits over his hand... like a glove.  Both accessory has some level of detail to them.  Eric's forearms are made from transparent plastic, and that's where his bionics are supposed to be. 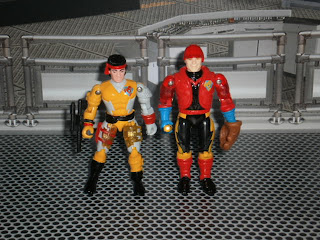 Overall, I like these figures.  Thanks to the die-cast parts, they are heavy, and because of that they stand well.  Unless of course, their hip joints are warped, like that on my Bunji in which case they can't stand properly at all.  I like the colourful costumes, they really pop out even on a crowded shelf.  I guess they'll stay there for at least a couple of days until I have to make way for the next thing I'm opening.
Posted by Novelty at 13:53