Almost two-thirds of the way to the end of the year - that's the 243 day mark.  We continue today with Animated August, and there's nothing more animated (that doesn't even make sense) than Macross. 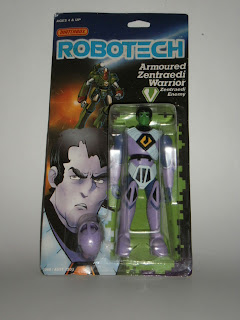 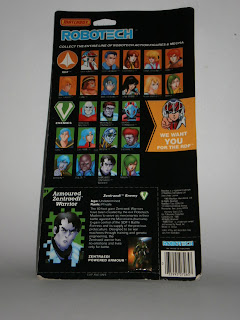 This AZW comes on a similar card to Dolza from yesterday, but notice how different the card looks here on him. 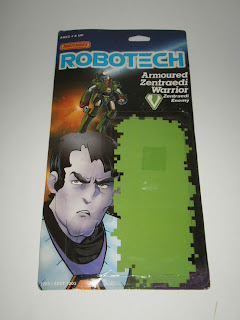 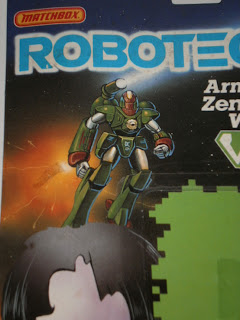 That's because there's so much custom drawing stuff on the card, from the huge unmasked mug on the front to the tiny robot thing in the background above and behind his head.  The drawing is rather well done and there's quite a bit of shading which makes it look rather dramatic.  Sometimes the card art is almost as interesting as the toy. 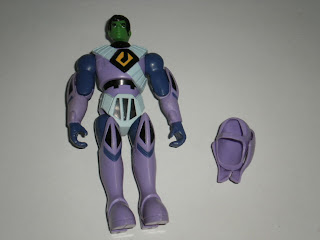 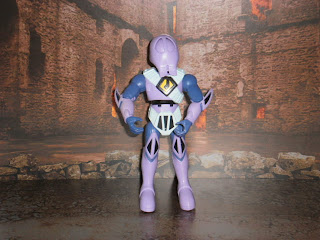 The toy is just a normal 5 and a quarter inch figure.  He comes with a 2-piece helmet which fits snugly over her head.  The visor can be removed to show...a purple mask underneath.  Not a very imaginative use for the mask.

The figure is moulded mostly from lavender plastic.  There are some blue areas, both light and dark blue, as well, and there's also painted black highlights.  The colour combination really makes it "pop" for me.  It's colourful and attractive and I have to say, I have nothing in this shade of lavender on my toy shelves.  The paint is also applied with meticulous care - afterall, this is from the company that makes replica miniature cars.  The figure comes with an ample amount of articulation - in fact, I think there are more articulation on the figure than is the standard of the time.  Wrist, elbows, shoulders, neck, hips, waist and knees. 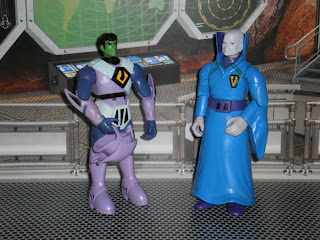 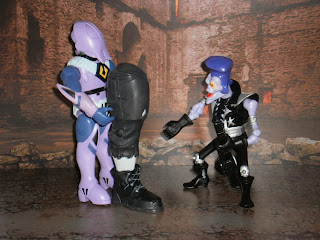 Overall I think the figure will look good on my shelf... if I have the space to display him.  His colour is fresh, his paintwork is applied flawlessly, and he would really stand out among the riff raff.  Sadly, I do not have the shelf space to put him on display, so he's going back into the box with Dolza.
Posted by Novelty at 00:35