There's no theme this week on Animated August.  I'm just playing "catch up".  The last two days, I "caught up" with my MotUC figures.  The next two will be another "catch up", this time for Biker Mice from Mars.  Now, I opened Charlie way back in Femme February, but did not open the other 2 figures I had with her.  Well, today is the day to start on the first of those figures, Karbunkle. 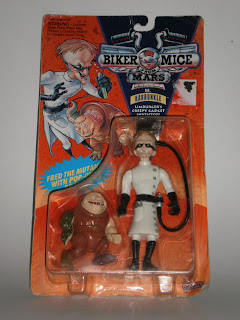 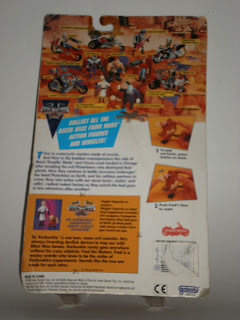 Was the Biker Mice a 90s phenomenon?  Well, they were someone's answer to the Ninja Turtles, so was popular at about the end of the 80s and the turn of the 90s.  Consequently, the packaging shows off the best of both worlds - nice illustrated art on the fron of the box, bios and action features shown on the back.  And that montage of all the toys in the line shown as a display is ingeniuos. 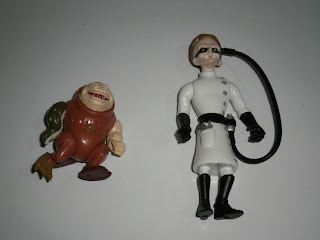 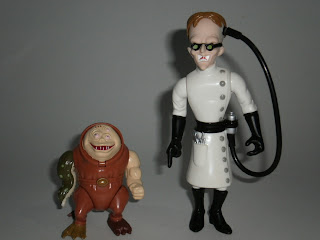 Karbunkle comes with only 5 points of articulation, and the tube between his waist and his head limits some of the head articulation. Five is about right for the toys of that ear though.  Where he lacks in terms of articulation, he makes up in terms of sculpt - which is excellent, and reflects the cartoon rather well - and paintwork, which is again immaculate - his face is painted so accurately despite all the little details of the sculpt. 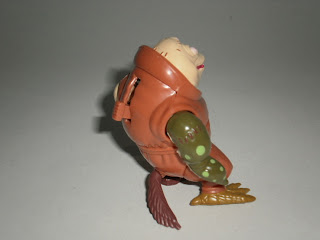 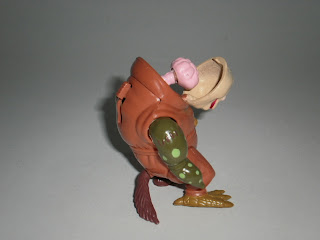 Karbunkle comes with his accessory, Fred, which turns out to be another figure.  Fred comes with five points of articulation, which is pretty standard for the toys of its time, and an action feature.  When the lever on his back is raised, his face is "punched" forward by the brain.  Funny, weird, and a bit horrifying all roll into one.  Fred also has nice animal parts, but despite this, is sculpted so well and balanced perfectly that he stands at attention very very well. 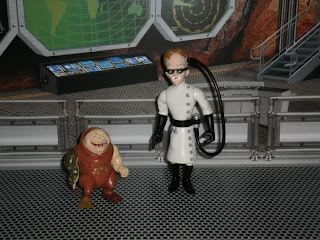 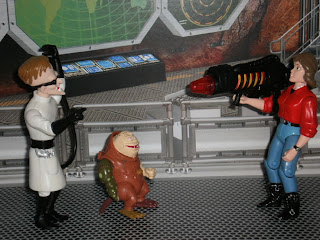 Surprisingly I like this toy, despite all its imperfections.  Finally Charlie has a friend out of the package... and back they go into the box.  I really don't have the space to display them.
Posted by Novelty at 01:40