Matchbox is well know for those almost realistic little die cast cars.  Well, Matchbox also made this line of plastic action figures.  Yes, I'm talking about the Robotech figures, and despite being owned by Mattel, Matchbox does have a few tricks up its sleeve that differentiate it from its parent. 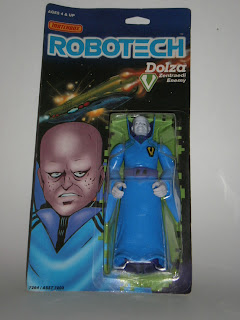 Dolza is one of the figures of the series, and he comes on a card that's rather narrow than normal.  The card really reminds me of a MotU card, at least in dimensions, although it's smaller than a MotU card.  The figure is in a clear bubble on the front, next to a drawing of the character, and as usual, the logo is splashed on the front of the card.  There's no title card, Dolza's name and alliance/faction symbol is printed below the logo and above blister.

The cardback though, harkens to the G.I.Joe design with a bio at the boot, and avatars of the figures in the line above it.  The actual toy pictures are not shown on the cardback, but instead, the drawings that grace the front of the card is shown as the avatar instead. 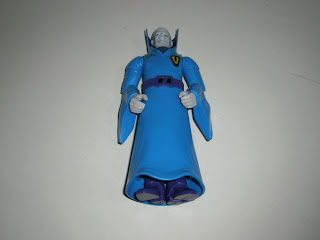 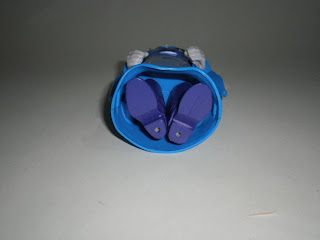 The figure comes with... absolutely nothing except itself.  There are nine points of articulation -  ball-jointed head, hinged shoulders, hinged elbows, swivel wrists and twisty legs.  The character doesn't have any legs above the knee, and the knees can't bend since the legs are just pegged into the torso/robe. 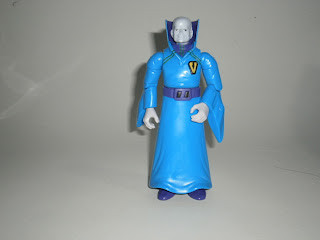 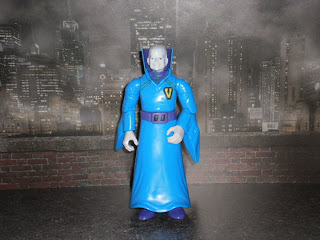 The sculpt on the figure is nice, but otherwise unremarkable.  I like the creases on the robe, which I thought is a nice detail.  The logo on his breast is also well painted.  The head is almost featureless, and could have benefitted from a wash of some sort to bring out the contours, but I guess this is a cheap line and toy technology wasn't as advanced back then... or toy collectors weren't as vocal and demanding back then... or both.  I'm not a Macross fan, so I have no idea.

Sadly, there's no space on my shelves for him, he's going back into the box as soon as well, tomorrow's figure is opened.
Posted by Novelty at 00:09