It's Animated August, and I'm opening toys this month that is related to an animated form somehow.  And I do like keeping things together (which is why I'm glad I finally got to open all the Biker Mice stuff I had earlier last week) and that's also why today I'm opening the flipside of yesterday's Zurg, Buzz Lightyear. 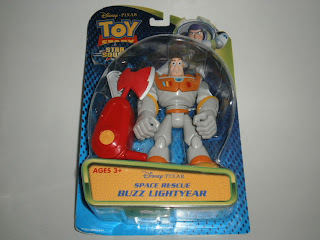 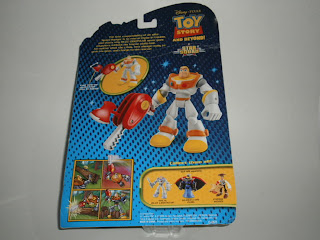 I've described the packaging for Zurg yesterday.  Buzz's packaging is similar, with pictures of Buzz instead of Zurg, of course, and a different 4-panel comic.  There's no sticker on the bubble this time stating the action feature, perhaps it was deemed not necessary since, after all, this is the hero as opposed to a villian? 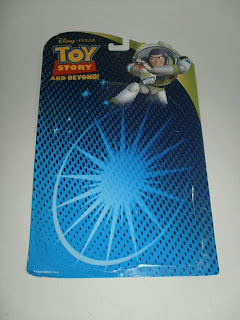 I have to say the front of the card is actually rather boring.  They could have done so many things there, but they opted for a boring starburst.  There's also that weirdness of Buzz's feet disappearing into nothingness.  That doesn't look too attractive.  Yes, I know the bubble will be where the figure ends, but is there anything wrong with bits of the animated Buzz getting behind the bubble? 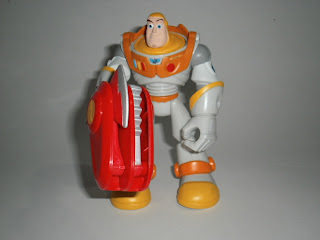 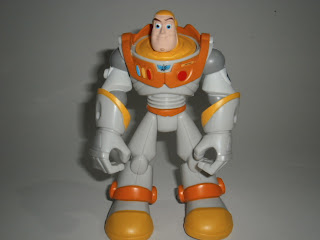 The figure looks like buzz, but is orange instead of the usual lime green.  Perhaps this is a variant of some sort, I have no idea.  the paint of the figure is nicely done, and the mould captures the essense of Buzz rather well.  The oversized hands and feet are a good indication of when the figure was produced - near the turn of the millennium when everyone and their dog though those anime influence was cool.  Well, that fad has passed, but this figure still remains. 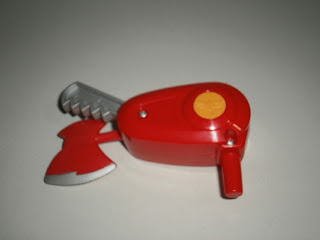 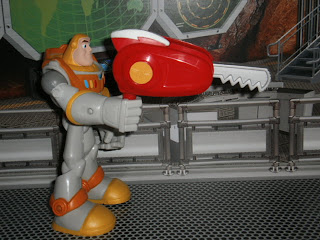 The accessory is a swiss-army knife with an axe and a saw.  The tools can be folded back into the body of the accessory manually and it does stay there rather well.  This accessory still looks as if it was designed for a preschooler in mind though. 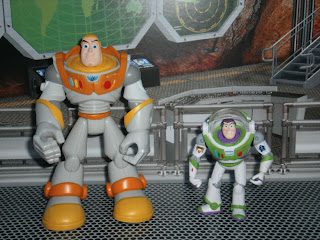 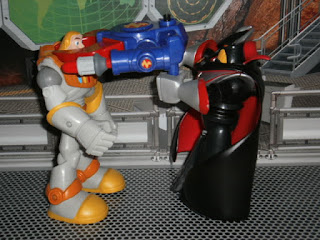 Overall, I find this Buzz odd.  Part of it is due to the colour scheme - it could help if it had the usual green.  The other part is the weird fake-anime influence on the character design.  I don't really like the figure that much, and I guess the box will be a nice place for it.  After all, I  already do have a good choice of a Buzz Lightyear to display on my shelves, and that's a version that gitd as well.
Posted by Novelty at 08:51