It's weird typing #300+ - I've been typing #200+ for over three months now, so it's just weird to know that I'm 62 more toys from the end of the year.  Anyways, today is the first day of November, and this is the first toy review for Nostalgia November - where I open toys from the 80s and 90s.  Yup, toys that are at least 10 years old.  Today's toy is actually something that's a leftover from Monster October, the creepy Mighty Max playset. 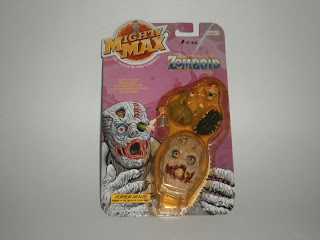 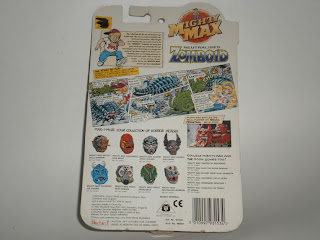 This playset is one of the smallest in the Mighty Max range, and it comes on a rather nice individualised card. with a nicely drawn image.  The bubble is arranged such that it's skewered to the side, but that's a great idea because it's as if the illustration is trying to grab it. There's a comic strip on the back, a description, and the cross sell below that.  Yet, there seems to be ample space for the proof of purchase and a whole load of text on the back. 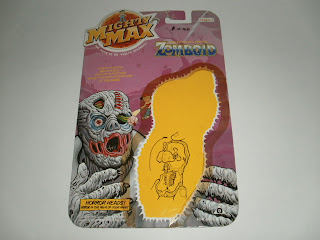 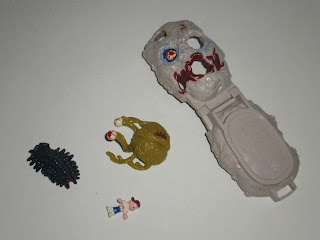 The instructions is actually wordless and is printed on the front of the card, behind the playset though.  There are four pieces out of the bubble, the playset itself, Max and two other monsters.  The monsters are unarticulated.  There's a giant slug that's all black with lots of legs, and a green brain squid thing with two eyeballs that's got a small amount of paint.  I have no idea if any paint slop is deliberate or not on this line.  Both are creepy as befits the line. 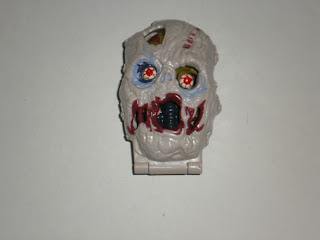 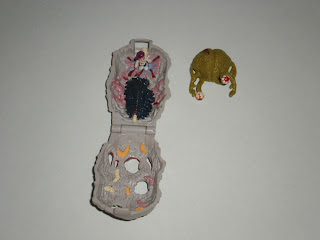 The playset itself is creepy and is sculpted to hold the accessories in place, and interact with the accessories.  The back of the mouth is formed by the slug and the eyes actually belong to the brain squid creature.  When the playset is opened up, it shows holes and slugs and all sorts of unpleasant things - things that are described in the poem "What little boys are made of".  There's a depression in the playset to "plug" Max into. 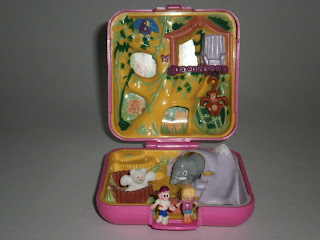 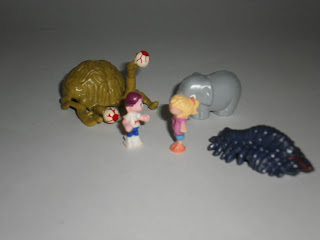 And as for Max, he's just an unarticulated figure that's painted not very well because of the small size.  He even lacks the bending waist articulation that his "sister" Polly Pocket has so he can't sit down.  Somehow I think boys got the short end of the stick here.