We're still on DCUC Wave 12 here as part of Justice League June, nevermind that this is the first day of July.  I figured that since I'm doing Jambalaya July with a hodgepodge of stuff, I might as well finish off the DCUCs.  Well, finish off as in finish opening them, and not off them like what the mafia would do.

Today we are looking at the Cobra Snakemen Copperhead.  Wow, that's like 3 different lines rolled into one sentence.  I have no idea who this slimey fellow is, other than the fact that he's a snake wannabe.  I do know he's in the Justice League cartoons and thus there is another figure of him in a smaller scale. 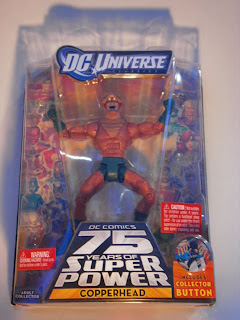 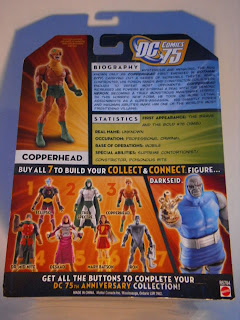 Now, Copperhead comes in the usual DC 75th anniversary card, which I've talked about in detail with Eclipso, so I'll just pass on it.  He is posed with a rather interesting "wide stance" in the box, but he's still facing the viewer, so that's all good in my book. 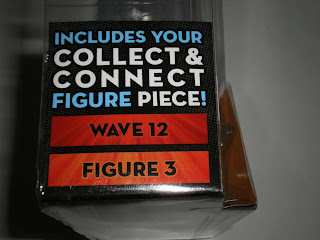 He's Figure 3, and I've already talked about not showing a picture of the CnC on the side of the bubble, or which part of the body the CnC goes.  The title card still covers the CnC though, so the only way to find out what's there is to check the back of the card, or to look in from the top through the bubble.  Also, the title card has been changed from the literal card, to a flimsy piece of paper on these packaging.  It's not a change I'm happy with. 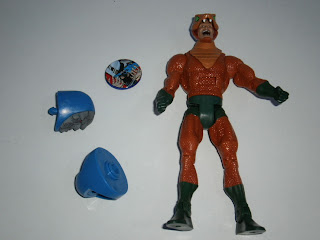 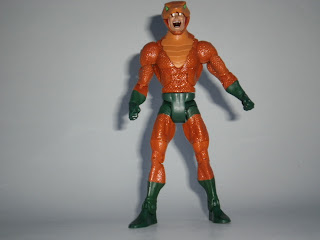 Copperhead comes with the badge (ack, how 70s!), Darkseid's head and groin (and for those seaching, I'm going to put in the word Skeletor here).  No accessories, although I'm not sure what accessory he should have.  A snakestaff would be cool, or a cobra blaster, but oh well.  I was slightly worried that the pose would distort his limbs, but my fears were unfounded.  His limbs aren't deformed by the packaging, of which I'm grateful.  Despite the boring mostly 2-toned colour of the figure, Mattel decided to actually sculpt in the scales on the figure.  I think it's a reuse of the Aquaman sculpt, but since I don't have a scaled Aquaman, I can't confirm.  Nevertheless, I like the texture.  The paintwork is simple and adequate too. 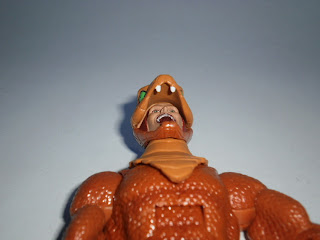 One issue I have with the excellent head sculpt is that they hid most of the face behind the mask.  Which means that the eyes of the figure are staring straight into the mask.  It seems odd somehow.  Mattel and the 4 hoursemen did the same thing with a few Skeletors in the millennium line (for example here, here and here), but Skeletor doesn't have eyeballs anyways, so he doesn't need to see through the mask. 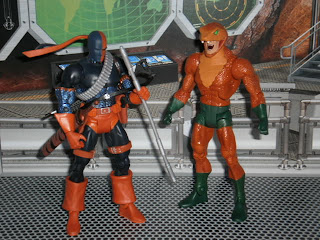 It's the third figure into the wave and I've been extremely pleased with the first 2.  Box or shelf?  Well, actually, I got this figure not to display with the rest of the DCUCs but with the Snakemen.  Yup, Snakemen.  He fits in so well with the millennium line, and does look somewhat like a generic Snakemen that I wish I had more of him.  So it's 3 out of 3 in this wave that I'll be displaying.  Despite my dislike of the packaging, this wave is getting the thumbs up from me so far, figure wise.  I hope I haven't spoken too soon. 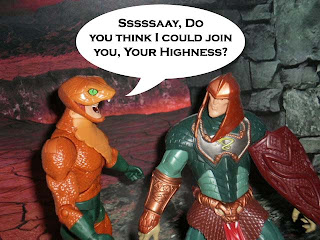