It's toy #201, and I've done Lego for a week, so I thought I'd take a break and just open these up since I'm way way behind everyone else with this.  This is She-Ra.  As a kid, I've always wanted the Princess of Power stuff to be in the same line as my He-man stuff.  After all, they did the cross overs on TV, so why not with the toys?  Well, 25 years later (and this is She-Ra's silver anniversary), we finally have a  proper She-Ra (and not a token) in the same line as He-Man. 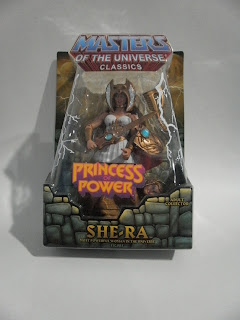 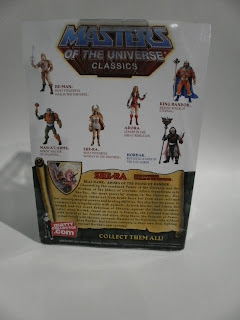 She-Ra comes with the usual bubble, and like Adora before her, she has the PoP sticker on the bubble.  She-Ra is nicely packaged in the bubble, and she shows off her accessories, while still in the bubble.  The back of the card has her bio, and I think the bio is getting more and more wordy. 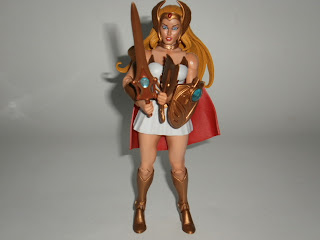 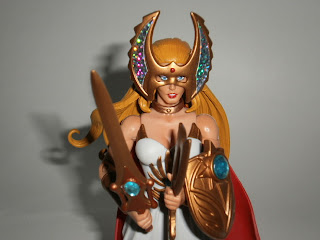 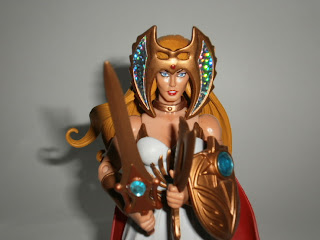 She-Ra comes with two heads which can be displayed three different ways.  The classic head is the one with the hole in the forehead for the headress, which may be worn as a mask or as her vintage packaging.  Her cartoon head is a lot more cleaner.  The heads have holes which are too small to fit the peg without some hot water treatement though, which is a pity. 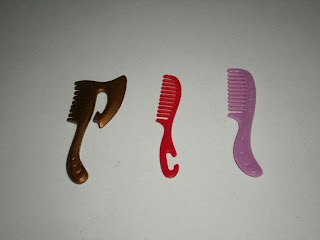 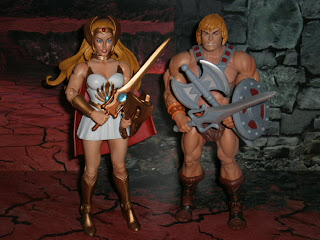 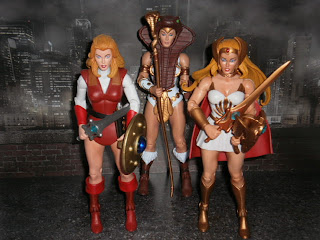 She-Ra fits in well with the rest of MotUC - she looks feminine, yet still muscular.  She's of a good scale when placed next to He-Man, yet holds her own next to the other female characters of the line. 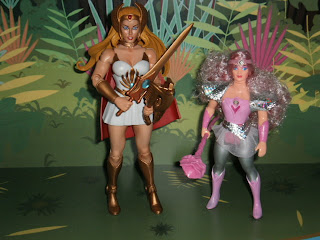 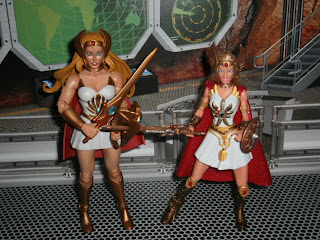 She's a lot taller than both her vintage version and her millennium version.  However, this is the first She-Ra without rooted hair.  He sculpted soft plastic hairpiece though, ensures that she fits in with the rest of the line.  Oh and this She-Ra isn't as anorexic as her millennium version!

I have to say this is the best She-Ra figure yet, and a fitting tribute to a character that's celebrating her silver anniversary.
Posted by Novelty at 00:48