I was digging through the boxes of stuff, getting ready for Animated August today, when I stumbled upon this.  Now why didn't I open this back in January when I was running out of figures for gitd January?  I have no idea.  I only vaguely remember buying this - mainly for it's gitd feature, of course. 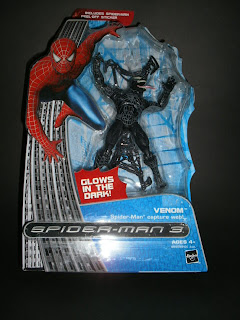 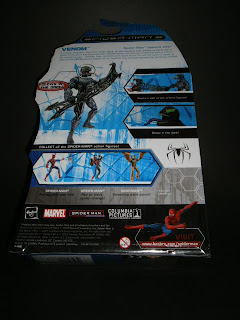 The Spiderman 3 box is crazy and complicated, with layers and layers of cardboard in the front to give it a nice 3-D effect.  What's sad is the small font for the name of the toy, and it's white on light blue, which really doesn't stand out.  The character in the bubble is posed, with his head turned to one side, and if this were something by Mattel, I'd have worries about warped plastic, but since this is Hasbro, and I have been playing with my hard as rock Midnight Stealth Spiderman, I wasn't too worried. 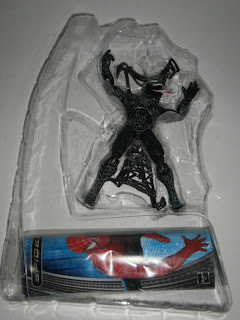 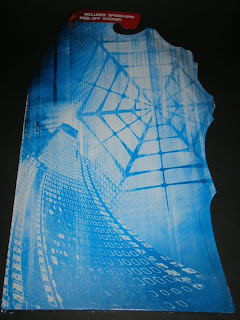 The front of the card has an interesting pattern printed on it.  Granted, most of it is hidden by the business in front.  There's also a lot of "empty" space in the bubble.  As is common for Hasbro toys of that era, there's a rolled up product catalogue at the bottom of the bubble.  I have no idea why they have to roll it up when they could have just placed it flat behind the figure. 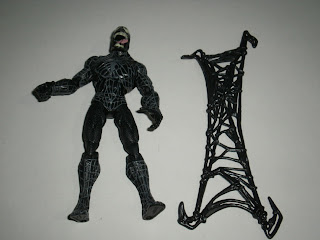 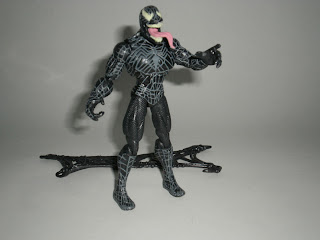 The figure is all black, with a painted body, tongue, eyes and teeth.  The eyes and teeth gitd, and does so rather strongly, which is good.  The intricate pattern on his body and limbs are painted with great care.  There weren't any smudges that I could see on my figure.  Venom comes with a rubbery spiderweb which seems to be of a weird shape. 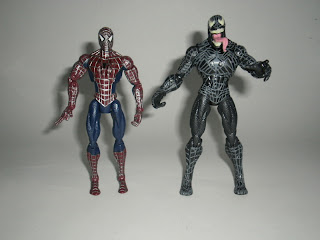 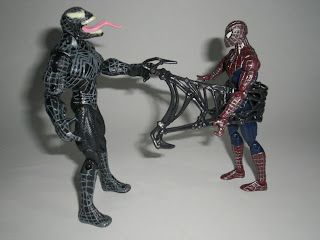 When placed side by side with Midnight Stealth Spiderman, Venom seels a lot larger, and of a different scale than the Spiderman, despite the fact that they are from the same line.  That's not good, as it makes Spiderman looks like a teen next to Venom.  Yes, I know Venom is supposed to be bigger and more muscular, but to make him so buff and taller seems to make him disproportionate with Spiderman.  And that's a pity.

Still, since he gitd, I'm gonna display him, and since he's a Spidey figure, he's not going on the gitd shelf, but gets displayed elsewhere on the shelf.  He's a bit of a disappointment - I wish the paint on his body gitd as well, but that would be too much to ask, I guess.
Posted by Novelty at 01:30