It's the first Monday of a new month, and this month, instead of a themed month, it's a no-theme month.  But I'm just gonna cheat and call it Jambalaya July to appear that I have a theme when in fact I don't.  I have packed up my JLUs though, but since I still have 2 more DCUCs to open, I thought I might as well finish them this week before I move on to other things.  yeah, DCUC sort of took over JLU month last month, but I don't think I've got enough for another month this month.

Anyways, It's Deadman!  Who is Deadman?  Boston Brand is his name, and being a ghost is his game.  He actually showed up in the Legion comic and help the "reboot" Apparition find her other in a storyline that is reminiscent of Patrick Swayze and Demi Moore's Ghost.  But I'm showing my age I guess. 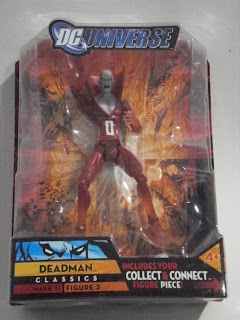 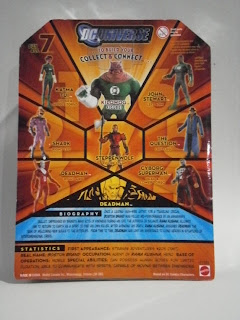 Deadman is Wave 11, which is the last wave that had the old classic packaging with the eyes on the front and a drawing on the back.  Again, Deadman's eyes on the title card are way too generic and could be representative of a few hundred other figures.  Deadman's pose in the bubble is weird.  It's like a crouch, but the hands are posed such that it appears as if he's doing a karate chop?  I'm not a huge fan of the posing in the bubble thing, but at least he's facing the audience, and the D on his ... abdomen is visible through the bubble.
The back is in the Hexagon form, with the CnC in the top instead of the centre, and the other figures in the wave around the central figure, who happens to be some New God.  Blegh. 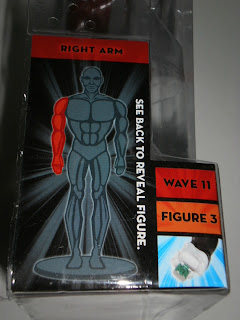 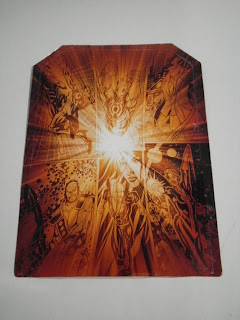 The side still shows a picture of the CnC piece hidden under the title card, as well as where it fits on the CnC.  Mattel could have combined it by showing an actual picture of the full CnC and greying out the other parts that aren't in the box, which would be a better design.  I definately detest what Mattel did with it in the next wave.

The front of the cardback still has the starburst, and the comics featuring the chracters in the wave.  I love the way the inks are done on the comics - whoever did the inking really did a good job. 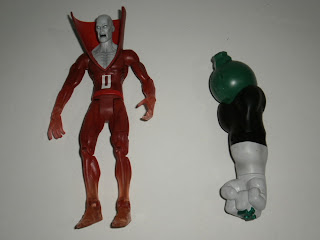 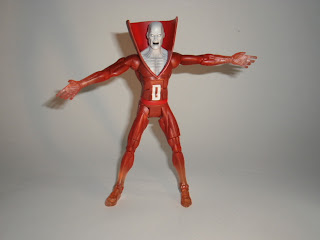 Deadman comes with... Kilowog's hand.  Oh, that's because this is a DCUC where accessories are close to nil.  Blegh.  This Deadman has 2 action features though.  The first one is that his limbs fade to transparent near the extremities.  The other is that the D on his abdomen supposedly gitd.  I say supposedly, because, like MotUC Zodak, it doesn't do it too well and only give off a feeble light even after hours of placing it out under UV light.  That was a disappointment. 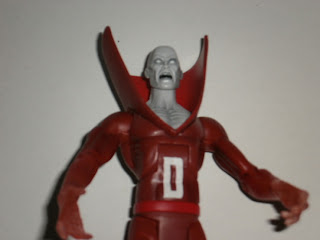 The upper part of the torso thta isn't covered by the costume and his head  is sculpted with quite a bit of detail.  I think the ghostly grey colour is the right shade for him, and the facial expresion just makes him way too zombie-ish, which is good.  The high collar is also designed well, and makes him stand out somewhat.  My only wish is that the collar could have been made of a softer plastic and given some detail like the capes, but that's no biggie. 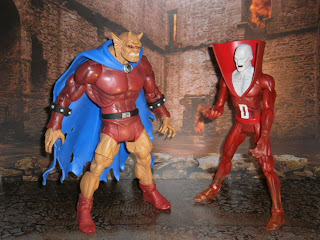 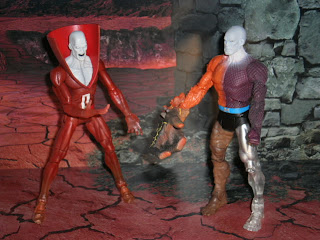 Deadman is slim when compared with the other DCUC figures, as he should be.  Nevertheless, he still fits in rather well with the rest of the line and seems a fine addition to anyone picking up ghosties and ghoulies.  For now he's staying on the shelf, but he's going with the gitd figures instead of with the DCUCs.
Posted by Novelty at 00:21