Here's the deal. I'm not a MOC collector - I open all my toys. However, over the past 8 - 9 years I've been collecting toys with the intention to open them, but for one reason or another (mainly due to the lack of time), I've never opened these toys. Well, all that's about to change. For 2010, I'm opening a Toy for each day of 2010, aka Toy a Day (TaD).

To amuse myself, I'm doing theme months, where each month, I'll open toys based on a particular theme. Due to my desire for opening entire lines together, sometimes some figures will "piggyback" onto a theme figure from the same line. Also, because the only action figure toyline I'm currently collecting is the one-a-month MotUCs, these will sometimes break the theme of the month, although where possible, the theme has been chosen to reflect the figure for that month, i.e. Adora for Femme Fatale February, Trap Jaw for Mecha.nic.al March.

January was gitd (and if you don't know that word yet, it's glow in the dark) January, where I opened stuff as diverse as Supernaturals to Tron. Last month, Febuary, was Femme Fatale February (thanks to an idea by Kev), where I opened toys with females in it. April heralds PoP anniversary April, June will be Justice League June, August will be Animated August and October will be Monster October.

The theme for March is Mecha.nic.al March (title spelt that way thanks to me being influenced by Articulated Discussions), where the toys being opened will either be a Mecha, Mechanical or Machines based. Here's the teaser picture: 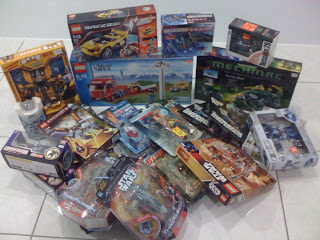 Terminator 2: When I opened the gitd Terminator in January, I did say the rest of the line will be the first thing to be opened in March. Well, I keep to my promise!

Lego Exoforce: How can I not include the Mecha influenced Lego theme from the mid noughties? There are 3 sets to look forward to this month. I have more, but I didn't want to overpower the month with way too much of one thing.

Star Wars Transformers: How can I not include Transformers in a month dedicated to Mechanical toys? Well, the sad thing is, I barely have that much unopened Transformers stuff, so I'll have to make do with the Star Wars version of them.

Star Wars Lego Droids: And talking about Star Wars, there's a nice line of droids there as well.

Email ThisBlogThis!Share to TwitterShare to FacebookShare to Pinterest
Labels: Previews