Revotech is an interesting Japanese line. It is based on a hinged ball joint, which is the basic joint for all the figures. But the figures in the Revotech line aren't ordinary figures, they consist of robots from a large variety of Japanese franchises. (There is also a sister line of human figures with the same concept, but I don't have any figures from that line as I'm not a huge fan of non-robot Japanese anime.) 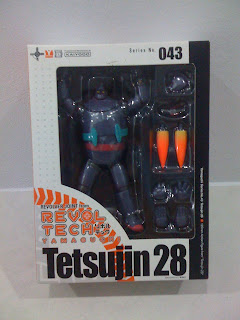 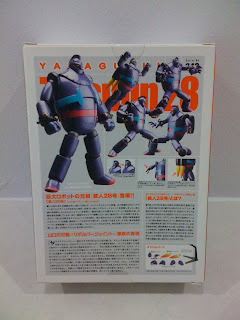 Tetsujin 28 is based on a 70s anime robot character, and this is based on the first version of the character (the second version is more angular). Tetsujin translates into Iron, so this character's name is really Iron 28. The cantonese translation is tiet-yan 28, or Iron Man 28. 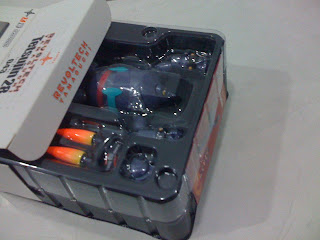 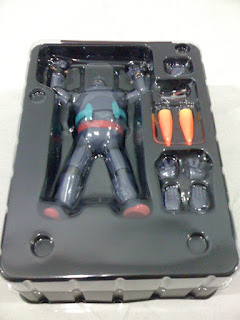 The tray that comes out of the box is amazing. The clear bubble cover over the tray protects everything and prevents everything from moving. Yet, accessing the toy is as easy as just removing the cover. There are no rubber bands or tape or twisty ties to get in the way, which is definately a plus. 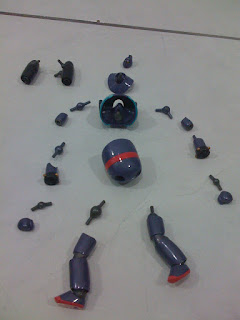 This is the figure partially disassembled. It gets a lot tedious separating out the joints from the body parts. Note that the jetpack is also held together by the special joint and is connected to the body with two of the special joints. 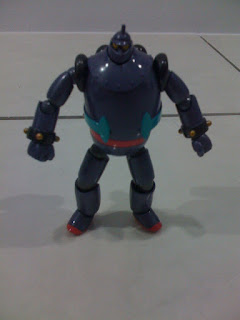 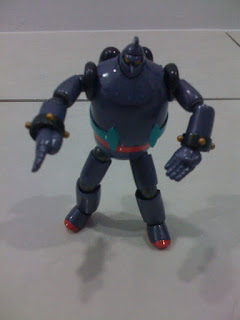 The good thing about the joints is that the articulation is immaculate and the figure can be posed in a variety of ways. The joints are tight - they have to be if they are supposed to be disconnected and connected repeatedly. The bad thing about joints is that the legs have insufficient strength to hold a pose. Yes, they can stand unassisted, but I'm sure it will not be able to maintain that pose for months. 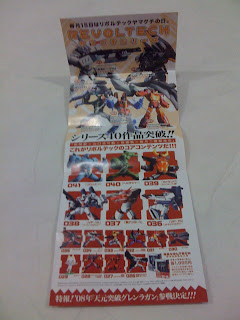 There's a little leaflet with the set that shows the other figures in the line, including Rodimus Prime. Yes, the Transformers started life as Japanese robots, so they are fair game for this line. The same joint architecture means that the parts are swappable and it'll be interesting to see Tetsujin with Rodimus' arms, for example. 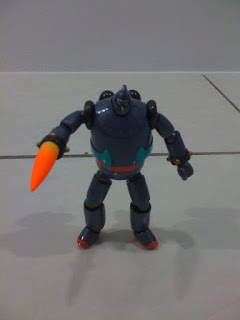 I do have a number of unopened Revotech figures, some of which I'm holding back for Animated August. There's also more photos of Tetsujin in his facebook album.
Posted by Novelty at 21:57