There's still quite a bit of Lego goodies for this month, so to speed things up, here's the 3rd and last of the Exoforce Mecha. This time, it's a bad guy vehicle, and instead of being a humonoid shape, this mecha is a tripod of some sort. 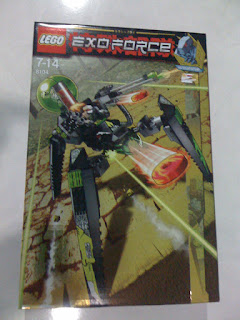 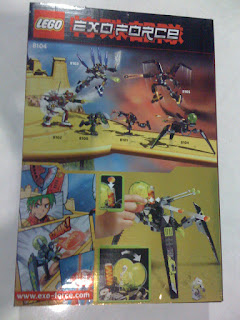 I have to say, I like the shiny boxes. Exoforce had that during the second year and it really stood out on the shelves. Of course, it makes photographing the boxes a pain, but the main aim was to stand out and grab attention on the shelves, and Exoforce definately did that with these boxes. 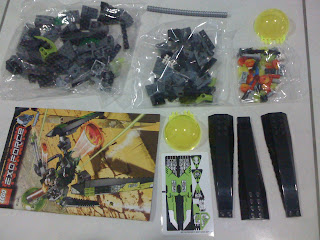 Surprisingly, there seems to be *more* inside this box as compared with the other 2 boxes. I like the neon yellow half domes which are not in baggies and the silver tube thing. There are 3 baggies as usual, unnumbered, but for a set this small, the numbers are redundant. 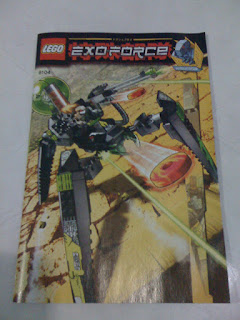 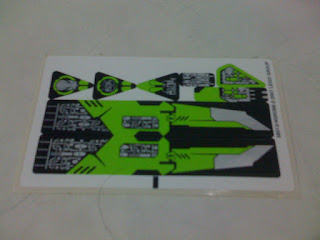 The decal sheet is interesting, black and green and white. It has been a while since Lego has produced a sci-fi set in those colours. Alas, this isn't one of those sets. As usual, the instructions has the same cover image as the box. Boring! 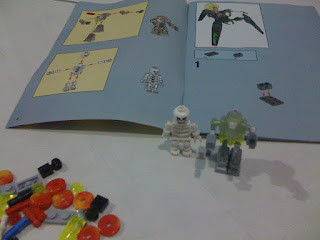 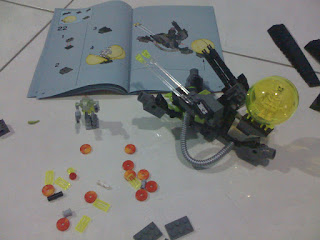 Thanks to the skeleton, there are two minifigs in this set, neither of which are the traditional minifigs. The bad guy droid has a clear plastic body with paint on most parts to give it the opacity. The overall result is nice. 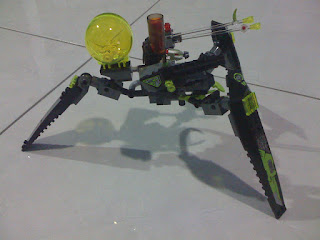 The completed model isn't as impressive as the Iron Condor, nor as tall as the Blade Titan, but it is definately more interesting. There's the Bionicle disk launcher, which really fires the disks, and the skeleton in the bubble, which gives it a really interesting look. 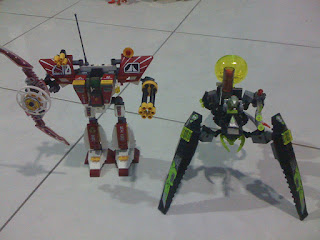 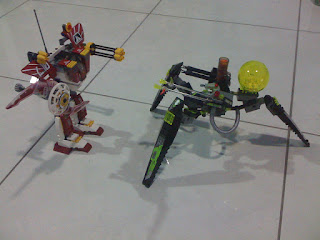 Side by side pictures with the Blade Titan. I like the Shadow Crawler better overall, thanks to its colour scheme and its design. As usual, more pictures of the build are in the Facebook album.
Posted by Novelty at 00:22